What The Huawei Is Going On With China? - Part III

So today the Herald has concluded there is a "thaw" in NZ's relations with China.  Seriously?


When the delay to the launch of the New Zealand/China year of tourism was revealed by the Herald last month, Ardern said it was because of "scheduling issues".

It was meant to be launched in mid-February but was postponed by the Chinese.

The delay raised eyebrows considering it was at the same time as New Zealand security officials raised questions about Huawei providing 5G services in New Zealand.

It launched a wave of scepticism around New Zealand's relationship with China and the Prime Minister was forced on the defensive for days.

Considering the Chinese New Year fell on 5 February this year these are not long delays. The new ceremony will be on 29th March.

There are now a number of scenarios.  None of them that good for the players involved:

1. The Herald's campaign of articles and opinion bagging our relationship with China was successful for Huawei and they are now happy they pressured the PM into saying they are still a contender for the 5G spectrum.  If this is the case, there are very good reasons for not using Huawei given this influence on our media and politicians; or

2. The Herald had no campaign for Huawei, Huawei had no media influence and it was all entirely co-incidental a series of stories and opinion hysterically ran for an entire week bagging our relationship with China.  The code name for this seems to be a "wave of scepticism".  The wave seemed to break on the Herald editors desk.  If this is the case, then there are good reasons the Herald should be investigated for pumping fake news against our national interest interfering in foreign affairs; or

3. The Chinese politically did get pissy forcing our PM to re-assure them that Huawei is still in contention for the 5G spectrum.  If this is the case, there is an absolute case for not using them as Huawei is for once proven to defacto be the Chinese government.  Why on earth would we give them the gig?

All these scenarios look quite bad for Huawei.

Meanwhile leading NZ/Chinese-critic, the academic previously attempted to be discredited by NZ's Honorary Consul to Yumai alongside of the use of the term "China Derangement Syndrome", wins retweet of the week: 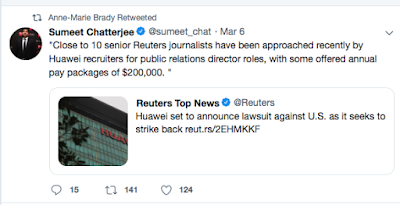 And such meme have emerged 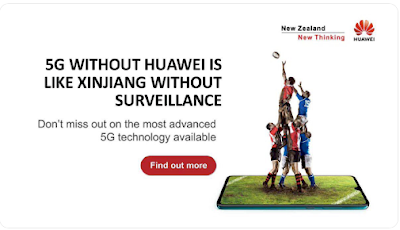 I look forward to seeing how Ms Brady's submissions will be reported on and received now she's allowed to give them.