Anyway I now have zero concerns for WRP. At best he is going to bond with RTE and hold his hand in the same way Phil Goff did with Yasser Arafat.

At worst, he is going to be internationally humiliated for electoral gain right in the middle of a Turkish election.  RTE has gone very hard against anyone spouting anti-Muslim rhetoric this election.  What better chance to prove his might than invite a guilty party of that over and send him home without his figurative testicles attached?

I think we definitely have an OPTION B as the winner here.  Only the humiliation was at his own hands before Erdogan even had a chance as WRP fell asleep. Erdogan then sucker punched him on the way home as he played Brenton Harrison Tarrant's video again at a rally. 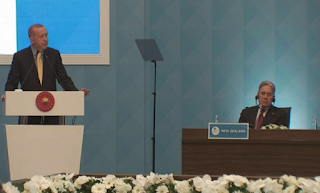 This is not the first time recently the cameras have captured WRP looking dozy. 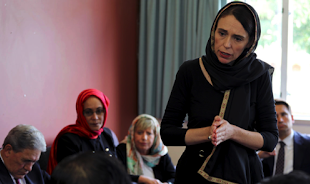 Winston Raymond Peters himself just keeps the show going.  But the show is now over.  Listen to Burr's questioning of him on the ground and you will see the ducking and diving of an athlete now not fit for the Masters Games.

Winston Raymond Peters here has been totally outplayed and gamed by Jacinda Ardern via her canny old advisors Heather Simpson and Helen Clark. Ardern has kept on smiling, wearing the flattering headscarf that shows off her deft cheekbones, shaking hands, kissing and hugging anyone who goes near her for the last two weeks and having the fawning masses talk about Nobel Prizes.  Winston Raymond Peters has given his supporters absolutely zero reasons not to just now vote either National or Labour as a response.

The supporters who voted for him because he opposes immigration, immigrants and with it come rhetoric time at recent elections - Muslims.  The man who has rhetoric that cannot differentiate between Islamist extremists and moderate Muslims.  The man who doesn't want more refugees.  The man who said it was silly to ban guns as a response to terrorism in Orlando.  He has put his hands up and raised the middle finger to all his supporters and voters these last weeks.

The man who says he wants to put NZ First simply cannot anymore.

His party is done.  Over.  An older man standing next to a much younger woman may start off as a good thing for him and the ego but eventually he does not make himself look younger.  Eventually it just reveals himself for what the man really is - too fucking old to be with her regardless of the money and power and improved lifestyle that she could never afford for her and another man's children.  Caught asleep “on the job”, said the actress to the bishop. That time has come for Winston Raymond Peters as Ardern along with Clark and Simpson are now actually making him look like a complete fool. 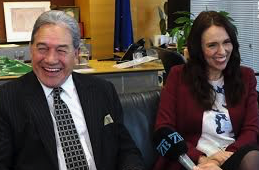