Ardern Hosts Her Own Dinner Party - In Paris 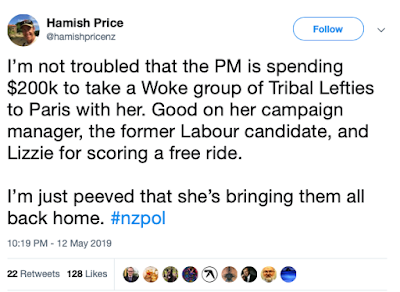 While this tweet is making a strong running for right-wing extremist tweet of the year, underneath it is a seriously decent question that needs to be asked.  Just who are these tribal leftie woke folk on Mother Ardern's Committee of the Acceptable?  And can't she finally have some opinions of her own, considering you know, she has driven the whole need for speed on censoring the net? Former All Black anthem singer,  Lizzie helps us out 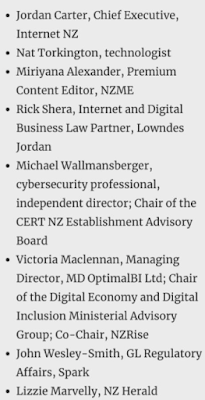 Let us not focus on how the former All Black anthem singer now gets to fly to Paris to represent us on issues that give her more self importance than she is ever qualified to have just by shouting loudly, smiling and conning some funds out of NZ on Air to talk about sex.  What I find particularly profound is the emergence of Jordan Carter and Michael Wallmansberger from the shadows.

I am not saying they are not qualified in technology and the internet, on the contrary.  I am however saying there is a certain large amount of nepotism, favourites and Labour lackey stooge about these non-democratic appointments into positions we presume paid or compensated at the trough.

All eight will effectively tell Mother Ardern what she could find out inviting a few mates over for a dinner party with entertainment and refreshments provided by Clarke.  In all likelihood before Clarke's arrival it would be a highly dull conversation at the table as they would politically all just agree with each other.  They are now doing this, but not in Grey Lynn or Wellington, but in Paris under the guise of mixing and mingling with countries that actually are important and influential in the world.

Flying your glee squad over to Paris on a junket  to hold your hand and pretending they represent New Zealand and all things free and good, is utterly absurd.  it is a political conference and both sides of the spectrum from NZ should be represented.  They are not.  Internet NZ is supposed to fill a function of representing the IT community in NZ.  Carter has firmly had his head in that trough junketing around the world for years farming the work out to his mates.  It has been even more attractive to him than going into his chosen field of politics and surely by now a decent Labour list spot.  The organisation itself has grown into a very large trough of many staff.  They do not  however represent all the voices needed for free speech on the internet and intelligent social discourse.  And the list of names is not representative of majority groups in NZ society either.

Of the eight names here, three are known to everyone in politics as close friends of Mother Ardern, one other is the Herald editor in charge of deciding what to hide behind a paywall so the public does not have the chance to read it.  I do not know of the others enough to comment.

Carter's role has stood out because he is Chairing a meeting called "Voices for Action" the day before the "Christchurch Call, the term in itself makes the whole thing sound much like the morning bird call suitably themed as it is on Red Radio's Morning Report. And I mean are Voices ever for anything else but action? No, "Voices For Inaction" is hardly going to make a conference title now is it?  Not too aspirational if not realistic.

Carter has previously stated that the focus needs to remain narrow

“Terrorist and violent extremist content” is reasonably clear though there will be definitional questions to work through to strike the right balance in preventing the spread of such abhorrent material on the one hand, and maintaining free expression on the other. Upholding people’s rights needs to be at the core of the Call and what comes from it".

So can we trust him to be able to define and control this once the ranters all start up? Not one of the NZ representatives is an expert on free speech or even a staunch advocate of it.  Even Chris Trotter would be a better pick than any of these eight and he is currently floating around on bad wifi through Italy.

You see my first dealings with Jordan Carter were highly amusing.  I was with Clear.net and he was with Ihug at the time when we were University students.  After a particularly fresh political debate ACT v Labour style on a newsgroup, Jordan decided he would make an extremely abusive comment to me that as a woman  even I immediately took offence to and wondered if it would be safe in a sexual sense to see this guy on campus.  Outraged, I did what any woman should do in the circumstances, no not run to the teacher or have a cry, but I upped the abuse and shot him abuse right back.  Jordan then reported me to my internet provider!  In a steaming fit of rage I still didn't complain to ihug, I called David Farrar and asked him who the hell this Jordan Carter was.  Whereby David informed me not to take offence to the comment in any sexual context against women and I was perfectly safe as Jordan is gay.  Much laughter resulted which made me much less affronted dealing with the indignity of some child from the Clear helpdesk calling me to talk to me about the report.

Many years passed and I later met Jordan through mutual friends and apart from being a Labour  stooge I find him now to be entirely reasonable and we laughed about it,  but should this incident have occurred in a current day context, I wonder who would have been in internet jail and having the police visit them first?  And that is what people are worried this will lead to - not the rights of terrorist organisations being pinged but overindulgent users of all the social media forums that are designed specifically to infuriate people through often negative engagement.  People do not participate on twitter and blogs to agree with each other do they?

We have already seen it with Facebook rushing to ban the likes of Milo Yiannopoulos, Laura Loomer and the incredibly articulate Paul Watson. We have heard about it with New Zealanders getting police stazi-like visits not on the basis really of anything but a few words posted on otherwise vibrant discussion and disagreement of politics and discourse on posts of varying qualities on social media.

If the roles for example were reversed and the NZ political right were in power and a gunman opened fire on a Catholic Church who we suppressed his manifesto of so everyone had to assume he was a left-wing hate merchant, then a NZ political right wing PM called an event to censor and suppress everyone's rights tagged to be a left wing extremist - how would all these woke folk on the Social Media Advisory panel of Mother Ardern's react then?

Oh we would not be hearing the end of the bloodshed to come!  Marvelly would spot the opportunity and attempt to start the revolution relaunching her pop career with a taxpayer funded cover of this Split Enz classic.