A "Muslim Boy In Kilbirnie" - Does Rufus Painter Have A Son Now?

- September 25, 2019
I cannot watch Jacinda Ardern on television.  I have tried, and it is not political.  I cannot watch because I cannot watch any speaker, regardless of their politics, use over-the-top hand gestures and movements around on a stage.  Ardern's movements are similar to mine using a wobble board at physio in rehabilitation for the fractured ankle.  It is little wonder Ardern is never spotted in high business heels, she would soon be in a similar state of disrepair and cripple moving from left to right to centre and falling right over.  Do not get me started on hand talkers. I equate it with exceptionally weak people attempting to distract you from the garbage coming out of their mouth.

Ardern gets a free pass from professionals in this regard still under the influence of her stardust, but she is one of the hardest to watch speakers in politics there is, regardless of her content.  I dare you to turn the sound off and watch her move for 22 minutes during her UN speech today.  There is no sense of calm or control.  It is dreadful, even in mute.

I read her speech instead.  I intended to post on the absolute dribble that is this "climate emergency".  Not surprisingly she didn't actually say anything of substance to argue with so I could not complete a post on that.

Reading her script however, I had immediate flashbacks to another Labour Leader fond of hanging out at the UN in David Shearer, and a story that sounded all too familiar.

"One example sticks in my mind.

It was only days after the shooting and I visited a mosque in our capital city. After spending some time with community leaders I exited and walked across the car park where members of the Muslim community were gathered.

Out of the corner of my eye I saw a young boy gesture to me.

He was shy, almost retreating towards a barrier, but he also had something he clearly wanted to say. I quickly crouched down next to him.

He didn’t say his name or even say hello, he simply whispered “will I be safe now?”"

She mentions nothing more about this child other than the following:


The young Muslim boy in Kilbirnie, New Zealand, wanted to know if I could grant him all of those things.

The bullshit radar was at this point in overdrive:

1. Jacinda Ardern at this time was at the peak of her personable powers. She was using what Greta Thunberg would call her "superpower".  A personal connection with everyone who spoke with her at that time.  Especially a child.  Especially two days after the event with hundreds of cameras pointed in her direction.

Ya mean to say this happened and she did not while she was still crouched down, ask his name?

I just find that impossible for someone of her people skills, to believe.

2. And more so that as a retail politician selling empathy and kindness as currency, that she kept      this from her anecdotes for more than six months?   Come on.  A politician manufactured as she had would have been using this from the get-go.

3. Another thought I had was that if this happened then why didn't the media with their zillions of reporters and cameras about during those times, capture this gorgeous heart-rendering moment for their own exploitation? Come on!  It was just two days after the shootings and the media were reporting 24/7 on her.   They are not this inept that one of the many in attendance would not have caught that moment and won an international award for it.

If this event happened as Ardern says it did then right across newsrooms, bosses should be hauling their staff over the coals for not recording this and running it as a lead item.

I found Channel News Asia footage of Jacinda Ardern with Grant Robertson visiting that mosque in Kilbirnie that day.  It was not hard. The footage seems to be in chronology and ends with the singing of "Tutira Mai Nga Iwi" as a farewell by the crowds and indeed the entourage heading towards the carpark away from the crowd.  The only "exit" of her out of the building in relation to her chronology of events is this one.

She arrives with Robertson and Gayford, comforts a woman and her children presumably a victim's relatives, lays the wreath with the crowd of people gathered, enters the mosque to meet with their leaders, exits the mosque to depart with security entourage and Robertson.

Not a child that she crouched down next to in sight as she left.  Here are the stills.  Her story as she tells it just did not happen. 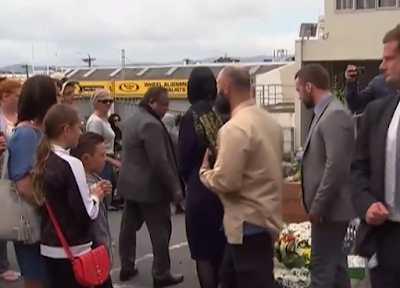 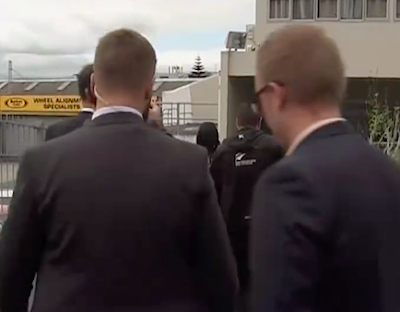 Here is the Mosque itself (not on that day) showing a carpark is where she exited from the building and turned down for her getaway no doubt to the Crown Limo down in the basement. 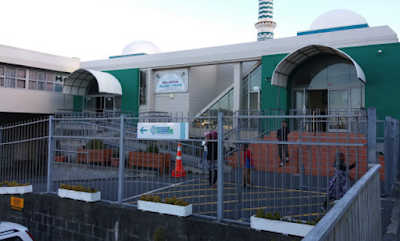 And this is how it looked on that day.  Even if she thinks this is the carpark, there is footage of that as well. 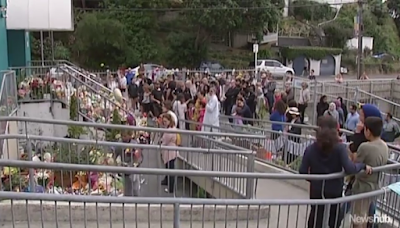 Ardern does stand at some point next to a young boy and say "It's ok", but he didn't gesture and that boy was with a woman whom she had earlier comforted at some length, a relative of someone who was killed so she would know his name and backstory.  Tova O'Brien was quick to the draw tonight and asked what she replied when the child asked if he was safe and she told O'Brien and waiting reporters she said a simple "yes".

Remember Ardern is not speaking at a Labour Party Summer Camp, she is representing New Zealand internationally and herself at the UN.  Facts do kind of matter.

Let us cast our minds back to the reaction when David Shearer made up stories for his speeches.  I will not post anything of what the centre-right in politics wrote as we were all gasping in disbelief.  I shall let the left tell their own story.  Shearer opened a speech to Auckland Grey Power with a story about a constituent who complained about a neighbour - a sickness beneficiary who went up a ladder to paint a roof.  Yes or as Colin Craig did, a Mr X. Those of us on the right called him "Rufus Painter".

Giovanni Tiso - The Man on the roof.
Daily Blog - Has David Shearer Put Beneficiary Parents On His Roof Again?

No one was able to verify the beneficiary and Shearer all but admitted he had made it up on the grounds that this sort of thing did happen so he was taking license to say so.  It was humiliating enough to call into question again every other piece of judgment he had made at that time and ultimately Cunliffe's supporters gathered even more momentum to roll him.  His deputy at the time?

So will he vouch for the story if asked by media and point to the exact moment in the footage or stills where this happened so Tova O'Brien can do an award winning, heart-wrenching follow up on the "Muslim Boy in Kilbirnie" and ask him if he now feels safe?

Because every news man and woman in New Zealand right now wanting that human interest tear-jerker post UN trip of Ardern's should be wanting that exclusive with the "Muslim boy in Kilbirnie" to ask if he feels safe right now in the world.

Or will Robertson keep his monk like vow of silence hoping as Chris Trotter has opined that eventually the stardust of Ardern's blows firmly away with a strong Wellington Southerly?