I met John Campbell one time in Auckland Airport.  We were both enroute home after the sad failure of the 2015 Cricket World Cup final.  It was around the time of Dirty Politics and with his long mournful,  sad John face he muttered words that he expected better from me.  Considering at the time he was very impatiently waiting in the special APEC queue in front of me getting all agitated with officialdom, I couldn't help comment that no one in life is as bad or as good as the media make them seem to be, and I was always happy to be on the side of the former.

Several months later in retrospect we also learned that Saint John at that time was in the middle of engineering his departure from TV3 to his advantage.  As slippery as an eel, yet as Saintly to the public as an Angel.

Which is why it is always in public life far better to have a reputation that is very easy and low maintenance to keep up.  Winston Peters is a master of this and why he has lasted so long and is still bullet proof.  You cannot land a hit on him for being rude, petulant, sometimes completely dishonest, often hypocritical and always potentially duplicitous.  He is quite honest about this and delivers it with a shake of the head and a wry smile.

Politicians like Jacinda Ardern and Justin Trudeau really set themselves up for failure when their entire personality, popularity and currency is in being the good one.

For without the pony tricks and the shallow veneers of charm and personality, they have nothing much of substance to them.

It wouldn't have mattered nearly as much this last 10 days if Jacinda Ardern had not sanctimoniously portrayed and sold herself as the champion of the underdog, protector of women, the #metoo movement and all that was good and sweet in the world.  There would have been not much of a story.  The issue is she has been sold to the people as an international defender of women, especially young women and definitely young left wing women.  Her supporters demand that she is better than a man with respect her behaviour towards other women.

Justin Trudeau likewise, with his lets face it, rockstar looks, greasy smile and careful diction is a packaged dream of a politician.  Yet today that all came rather unstuck when news came out finally that he had participated in what is termed "blackface".  Not to mention getting very handsy with the woman in front of him who is not his wife. Now of course I do not see much of a deal about dressing up in costume, I recall being dressed as a tulip in a school production appropriating the Netherlands.  I missed out in that same production on the Swazi warrior and singing Josef Marais' medley that is probably banned in schools today.  I do see a little bit of a problem singing the Jamaican song Day-o but believe might have done so myself on occasion while touring Barbados late one night with some locals after a cricket match. 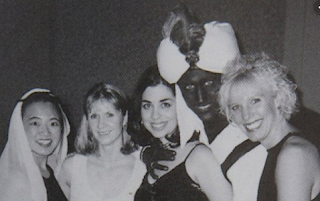 Being a teacher however at a private school while in dark costume, yeah, that is starting to get up there as well as groping a woman in front of you that is probably not your woman.  Yet still not a hanging offence.  However for the woke, left that Ardern and Trudeau mix in, this is a hanging offence to everyone else, especially if those on the political right were to do it.

Canadian Prime Minister Justin Trudeau apologized Wednesday night for wearing brownface at a 2001 “Arabian Nights”-themed party—less than two hours after TIME published a previously unreported yearbook photo from the event at the private school where he was teaching.

“When I was in high school I dressed up at a talent show and sang ‘Day O.’ With makeup on,” he said.

The problem is this is Justin Trudeau.  Not Donald Trump.  He has set upon criticising people who are not as pure as he is.  We all expect and demand better.

If Trump had been caught doing this can you imagine the outcry?  Impeachment would be called for.  It would be as much as Trump making Jacinda Ardern's terrible insult today calling the Japanese, Chinese.  This was covered internationally with much humour.  Leftists in New Zealand tried to brush it off as did Winston Peters, however the Japanese are lovely hosts and will be fuming.

The SCMP in Hong Kong enjoyed it immensely, any chance to laugh at China currently.  The CNN (Clinton News Network) even had a go using the Asia Foundation.  The pious pinkos at The Guardian had a go and brought up the unfortunate Sainsbury, Trump orange incident.  The Singaporeans had a go.

This goes back many a year and is not akin to mixing up New Zealand and Australia.  The Japanese and Chinese have a deep hatred ingrained in both cultures.  Blaming jet-lag when I bet the second her head hit the pillow in Business or First class she fell asleep without Neve to worry about, after the 10 days she has had, is ridiculous as well.  It was possibly the first bit of solace she had received.  She just buggered it up because of all the stress she has been under. 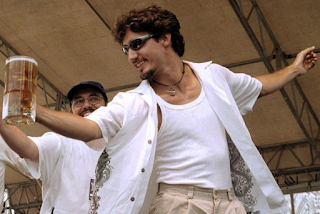 Trudeau, who calls himself a feminist, has already apologised for an alleged historical groping incident. He also is going into an election campaign with this under his belt.

He broke ethics rules by taking a vacation to the Caribbean island owned by the Aga Khan, the billionaire spiritual leader of Ismaili Muslims.

In 2018, he was mocked for dressing up in elaborate Indian clothing during a disastrous trip to the subcontinent that was light on formal business.

Then in February, the SNC-Lavalin Affair came to light.

Mr Trudeau was found to have violated conflict-of-interest laws by trying to improperly influence a minister into cutting a deal for a company facing a corruption trial.

The teflon on the frypan can only manage so many scrapes before it is rendered useless.  When you hoist your own petard it comes much quicker.