Radio NZ have another interview with another complainant, this time the then 13 year old at the centre of the latest allegations surrounding Deon Swiggs.  His alias is Josh.  Remember he was 13 at the time in July 2017.

He told RNZ he met Swiggs at an event, where was "bear hugged" after going in for a handshake. It made him feel "unsafe", he said.

Sounds like something Donald Trump used to do to young women. That was in July 2017 so it is very likely that Josh is still a minor.  More contact allegedly happened a year later where he had another big hug and  allegedly said to him "I think we are passed that".  🤮 as Deon should be emojing up late at night.

Josh also alleged Swiggs messaged him on Facebook "out of the blue" and late at night asking him why he did not have a profile picture and calling him a "very attractive lad no need to be so hard on yourself".

He told RNZ further messages in May that made him feel uncomfortable prompted him to come forward.

I don't think we really need a retired Associate Judge working a long weekend to conclude for us that if there is written evidence of these texts then it meets the burden of proof for being totally revolting and revolting enough for the voters to know about.

We do not need much of a guess to work out what youth group "Josh" belongs to and its likely links to the Labour Party.  Which again was why Josh didn't wish to upset the funding cart.

Fortunately "Josh" reported it before it had any opportunity to escalate to something else so it would be highly unlikely a criminal standard of behaviour has been met.  This is why these complaints cannot just go to the Police as the Police will not do anything and then what does a kid do when faced with this happening to him at 13-15 years old?

Swiggs has of course denied all this, however one wonders how deep the hole will get if he keeps digging.  Not even someone of the splendiferous skill set of Matthew Hooton could or would  successfully spin a client texting physical evidence to a 13 year old as above.


In 2016 here were the candidates for Swiggs' ward in Central Christchurch: 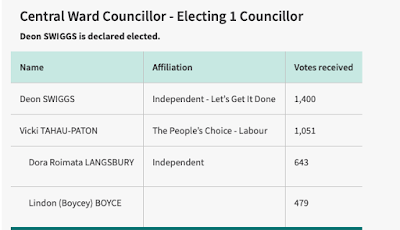 This year there is no People's Choice candidate just a Labour one.

Jake McLellan is not a Peoples Choice one on the official material.   He is the sole candidate for Council running under a Labour banner.  Unlike in 2016 there is no mention of People's Choice.  Labour are out to win this council seat for themselves having not got that close last time. 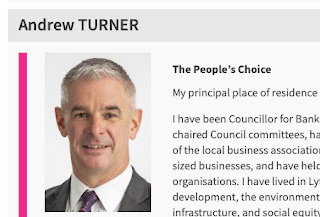 But hello now McLellan is being represented on the website of People's Choice as their candidates as are the other Labour people standing in Central. 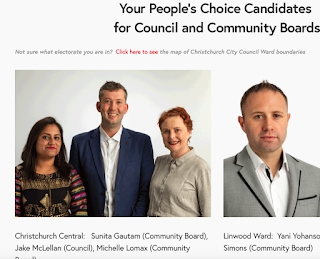 People's Choice apparently have an association with Labour.  I would go as far as saying that is nonsensical, they actually are Labour and not even in drag.  The Labour Whānau down in Canterbury is a large and active one.  Oh look here is the Deputy Mayor and two other People's Choice Councillors on the ticket in Labour tees and rosettes gushing over Princess Cindy.

The ticket has an association with the New Zealand Labour Party, and although it has never run a mayoral candidate under its modern title, it tends to support centre-left mayors both on council and during election campaigns.[2] The People's Choice city council caucus is currently headed by the ticket's leader, Deputy Mayor Andrew Turner.

Yes the same Andrew Turner pictured here being touched by Swiggs. Turner looks like the most fun deputy Mayor in the country and a contestant definitely for the best rig.  I have possibly seen in my research, enough of his erect nipples prancing with consenting men of reasonable age, in South Island temperatures yet to have the gift of global warming, to last me a lifetime.

Here in late June 2019 though, Swiggs again clings to dear life by association and narrates he is "out with my friend". Which in politics is often a euphemism for clinging to dear life to someone for your own means. Swiggs seems an expert in it.  Those of us on the centre-right often use the phraseology to cause the left to blacklist anyone on their team who associates with ours, so sensitive and tribal they are to that. 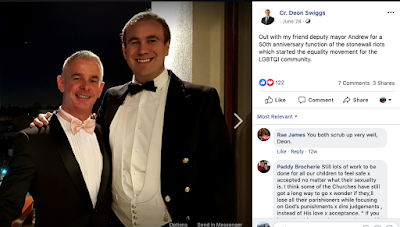 By June 28th when Swiggs posted this picture though Dalziel had already met the complainants and was well aware of what was about to go down.  Her Deputy however just FOUR nights later was out with Swiggs at this major LGBTQI event where hello, after she claims to have specifically banned him for attending events where young people are, there would be young people absolutely everywhere footloose and fancy free.

Wouldn't you warn your politically aligned centre-left Deputy you were investigating his conduct at this point or well before?   It is not like they are enemies. Dalziel and Turner are on the same team!  And it is pretty clear from social media they socialised together a lot in the LGBTQI community and at other times.

Labour are of course running for cover over this pretending it has not happened and soon I am sure they will blame something on Paula Bennett, however their political vehicle in Christchurch embraces Swiggs when they want to, he has very close associations with both the Labour Mayor in Dalziel and the quasi Labour Deputy Mayor in Andrew Turner.

He stood for Dalziel's vacant electorate for the Labour nomination and only relinquished his membership when he had a tantrum about being beaten by someone more PC than he is.  Labour do not stand a separate candidate in Swiggs seat to Peoples Choice, they share the ticket but he is embraced as a centre-left councillor by the two most senior members of the centre-left in whatever disguise they say they are working in at any one time.

Some questions remain because right now it looks like Swiggs is BFF's (best friends forever) with both the Labour Mayor and the Labour Deputy Mayor, and they both knew about allegations circling in the LGBTQI community from young boys about him, going into an election campaign :

- Did Labour force an axe to the Peoples Choice recognition when they realised Swiggs was vulnerable and they could then just trust the people of Central Christchurch to vote for the major brand?  Or are they "standing" against him but not really trying?

- Would she have behaved in the same elongated protective way if an allegation was made against a centre-right Councillor?

- Did she inform her Deputy of his conduct?  And what is his relationship by way of close or not so close friendship with Swiggs?

- And just how did she explain away that Swiggs was not to attend any youth events?

- How long was this banning going to go on for?  Because she was in no hurry until Josh pressed matters and conveniently the Labour Party were caught short with "Sarah" to actually do a damn thing before the election in October?

- And again what is her relationship by way of close friendship with Swiggs, and will she deny allegations from locals she has referred to him in the past as her "adopted son"?