- September 10, 2019
The Fairy Gloss on Princess Cindy is all but gone in her handling of victims in the Labour sex scandal.  We are well past the point that sacking the President is enough.  Not that he looks like going anyway.

Ardern would have had to have gone back to her days of working in a fish and chipper to see such volume of oil as was tossed on the burner today by a brave articulate, male student who suffered through twenty minutes of quite brilliant responding in an interview on Red Radio, Radio NZ with Lisa Owen.  He is the very sort of person who should be a candidate in a political party.  I doubt he has ever received media training but he doesn't need any.  Up until he was asked about Princess Cindy he didn't stutter or agh at all.

The male student (we will call Mr Y as Mr X is ruined now thanks to Colin Craig) was verbally attacked and physically assaulted by the scumbag when he behaved like a real man should and attempted to stick up for the women involved in his sustained attacks on them.  Mr Y is a hero, yet rightfully is terrified of the consequences on his life, professionally and in politics.

And that is why this is not an employment issue.

I don't care who this scumbag is, he is working with volunteers in a political party all of whom want careers in politics.  If it was an employment issue then yes, he should be innocent until proven guilty and all complaints should be ignored unless they are taken to police.  The problem is with politics and you do not understand until you have seen it yourself, is that it is an entirely different atmosphere.  Anyone working in politics as these young kids have will see that happens when complaints are made by anyone against politicians.  Spin doctors are brought in, the accused is protected, the complainant is made to feel terrible. and excluded (like Labour banning them from the premises).  "Crisis managers" are all around them and they see the power imbalance first hand.  "Reputations and issues managers" are all around Wellington and politics.  In National you get a death rattle from Michelle Boag or Glenda Hughes who kindly pretend to wish to reach out and assist you. Labour too would have similar "fixers" (usually female sent in by the men, to fool you into thinking they are reasonable people) who pretend to be your mate but the second your guard is let down you are fed to the dogs and moved sideways.

They only have to look at a 2011 example with the the way Jacinda Ardern's best mate Darren Hughes was protected by his landlady Annette King and his mates versus the complainant in that case, forced to get his own legal representation and how his life was changed.  Maybe the kids cannot remember this, the rest of us can. I bet that victim doesn't have any role with Labour or politics anymore and only got through what happened with the assistance of monied parents.  Hughes got a new life and is still invited to Labour Party events and welcomes like a good old pal.  He is still around Ardern and Robertson.

Everyone in the reviews and inquiries into this are hopelessly compromised in Labour as even as far as the lawyers and QC's they all want to get paid or keep their jobs.  For all we know the scumbag has threatened these kids that he knows the Police or Justice Minister.  Every kid who works in politics knows how that works. Or doesn't for them if they are from the wrong side of the tracks.

A man who says he was assaulted by a Labour Party staffer would like to meet with Jacinda Ardern to discuss the party's handling of claims of sexual abuse and assault.

Never going to happen.  Our hero Mr Y still has the horrid "True Believer" Syndrome  he needs to grow out of that volunteers have in political parties that their Leader must not have known else she would have come to their aid.  He still believes the possibility that Ardern did not know.  I do have a large bag of air I would like to sell him or a bridge or two if that is the case.

He said he thought it was plausible that Ms Ardern was not aware of the seriousness of the allegations and would like the opportunity to meet with her one-on-one.

Her close advisors, remember all of Darren Hughes' best mates such as Grant Robertson, will be telling her not to go anywhere near any of them hiding behind the "process", "the QC needs to review independently".  On screen Ardern is maintaining her huge frown concerned face she brings out to show empathy with the victims.   This is however now by far her largest problem in politics, the kids who have complained and the creepy lurker still employed in her office, that people have actually seen when she has claimed he has not been in the building for now five weeks.

These kids are Labour's largest crisis because it stains Princess Cindy in so many ways.  She is bottling explaining it and losing because of it every time she opens her mouth.

Princess Cindy currently hides as Haworth does behind the QC.  Remembering they have already trotted out employment barrister Maria Austen to review this matter who gallantly like a good paid lackey stuck to the specially hand-knitted terms of reference and spat out the answers the Labour Party wished to hear.

If you have a very good memory you will recall Ian Wishart's expose featuring Jevan Goulter about the Labour Party hierarchy.  Goulter is now apparently a respected political advisor of Hone Harawira and in Maori politics, and still sticks to his story about the inner workings of the party.  Perhaps someone needs to ask for his opinion on these matters. 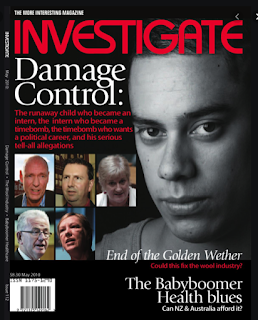 Back to Ardern today we learn many of the complainants actually hero-worshipped her.

The complainants said several of them got their start in the party volunteering for Ms Ardern's campaign to win the Mount Albert electorate and it was time for her to return the help.

"She has a lot more resources than us, we can't keep this up all on [our] own and we still need her help. Her staff were told about the investigation early this year.

"She gave us hope in the party," the statement said. "Now is the time to act."

This makes the betrayal complete.

The most ironic part of this.  The reporter who really smashed this story open is Alex Casey, daughter of one of the most loyally left-wing women in New Zealand in Cathy Casey.

The story can never be written off as a right-wing set up.  None of us are quite this good.  They are being outed for their filthy dealings and cover-ups by the spawn of one of their own Royalty.  Little wonder the likes of old school gentlemen Labourites like Chris Trotter are mortified.