- October 06, 2019
David Farrar in the past has been kicked out of the VRWC (Vast Right Wing Conspiracy).  He admits himself back in of course, and we all let him  but today's post leads me to believe that for the first time in quite a few years he needs to be re-expelled. 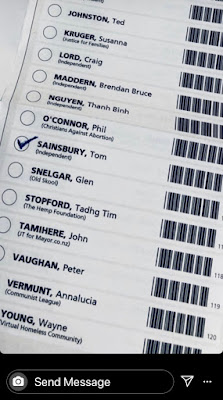 It’s effectively a choice between Goff and Tamihere. Tamihere will shake up the status quo.

No. No. No.... Voting because someone will "shake up the status quo" is not a good excuse when who you are asked to vote for is a joke of a candidate and completely full of b.s and has been his whole career making a joke out of everyone who has ever voted for him.  His promises do not make any sense and running with Christine Fletcher just makes him three times less appealing.  His campaign, despite being run by alleged cross-party political masterminds has been an epic clusterfuck from woe to go.

I prefer to be honest about the choices and just vote for the professional comedian - Tom Sainsbury.  Which I did as above.

Last election I voted for Phil Goff over the waffly buzz-word, do nothing Queen, Victoria Crone.  I still believe that to be a good choice.  The centre-right simply need to find a better Mayoral candidate and I do not mean John Banks or Don Brash!

Highlights of the others include:

Christine Fletcher and Mark Thomas. This is a Ward where the Labour-City Vision-Greens machine has squandered their mandate. No one thought Cathy Casey would be under serious threat but she and local board allies like Peter Haynes are now facing serious headwinds on issues like Chamberlain Park and the disastrous Mt Albert town centre upgrade. If Mark Thomas joins Christine Fletcher, the centre-right’s majority will be greatly enhanced.

I will never endorse Christine Fletcher and neither should anyone in the VRWC.  I posted at length on the reasons why. She is to the left of the lefter parts of the old Alliance and needs to go.  Thomas is a strange man who is apparently currently living in his office while his family live in the "family home", in other words - his wife's home.  If I lived in that ward I would risk prosecution and change my address in order to not have to vote for either of them as the alternatives are raving lunatic left wingers, in other words just like Fletcher.

Grant Gillon and Danielle Grant. Gillon is a fomer Alliance MP and Grant a National Party member but they have shown how to put the community ahead of party politics, working as part of the More For The Shore team.

I am sorry not sorry David, GRANT GILLON IS A FILTHY PINKO. ENDS.  His whole family have infested politics.  Grant Gillon stands for more money for Grant Gillon. Career politician who has had his time. Just as no one on the left worth their salt would vote for Sir Roger Douglas tactically or otherwise, there is no excuse for voting or endorsing Grant Gillon.

There are three candidates who could win. City Vision’s Pippa Coom, C&R’s Sarah Trotman and incumbent Mike Lee.
If the election was STV I’d say vote Trotman 1 and Lee 2. But it isn’t. It is FPP and if City Vision pick up the seat, Goff is more likely to be able to push through big rates increases.
Mike Lee as the incumbent is most likely, in my opinion, to beat Coom. Lee is a leftie, but Lee has support from all sides, including Don Brash on the Right and Lisa Prager on the Left. No one councillor has done more to stand up to Phil Goff more than Mike Lee. He is also a fierce advocate for small business operators, heritage and water quality.
I think Sarah would be a great Councillor, but I’ve not seen any polling that suggests she can beat Coom. So this is about voting strategically.

I couldn't care less what any polls say, bugger all people actually vote in these elections, how many people answer their damn phone for a poll on local body elections?  Any VRWC member or indeed anyone right of centre who is voting for Mike Lee for ANY reason needs a lobotomy and public shaming and perhaps forced to watch the All Black RWC QC solely on Spark streaming.

The rationale that Don Brash and Lisa Prager support Lee, so we should, simply means there are now twice the reasons I could come up with myself in this post not so long ago, not to vote for him.  I do not vote according to endorsements from Dicky old Don Brash any more than I would wacko hat wearing Prager.

The only person any sensible centre-right voter should be voting for in Waitemata is Sarah Trotman.  If people are still voting for Mike Lee then so be it, they deserve yet three more years of mediocrity.