Stop Sending Your Kids To University!

- October 13, 2019
What should be concluded from the last few weeks of news media is that University is not the place for some teenagers. 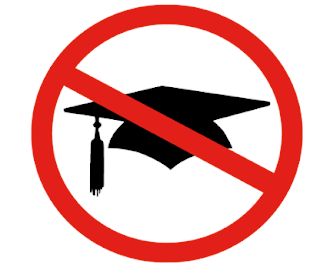 There is nothing wrong with this.  There are plenty of other things for 18 year olds to do.  However if they cannot make it into the big world independently yet, for god's sake keep them at home until they can rather than send them off unprepared.

If your child is struggling mentally with life before they leave school and go off to University, being an 18 year old especially in a halls of residence living away from home sure as hell is the last place you send them.

You might have contracted out parenting for five or seven days a week to boarding school, but University is completely different.  They are not special.  They will not be babysat. Everyone at University is just a cold hard ID number and other than taking your money, there is not enough man-hours for staff to care much who passes and fails.

If your child only "just" managed to get good enough grades to get into University courses, I am sorry, they will probably fail in their first year.  It may be the first time they have failed at anything in life.  That is going to be awful for them.  The wailing when little Johnny doesn't get into Med School is going to be terrible, tissues will not help this experience you will need beach towels.

Josephine Franks has a very honest piece from an anonymous source in Stuff Nation.  The sources parents seemed to think she would be babysat to some extent.

They had been assured there were plenty of residential advisors (RAs) on-hand, an important consideration given her daughter's history of mental health problems.

I don't quite know how you can expect the responsibility of that to be contracted out to be fair.  The source's mother moved down to support her.  This is a luxury few parents can afford.

In May 2017, her mother moved from Auckland to Wellington to support her daughter.

The rest of the tale reads like a nightmare.  The source is still studying for her degree so that is ending well but this is merely an example of a student who should never have left home to start with and it has taken her mother really babysitting the child for this to happen.  Forget helicopter parenting it became a full-time job looking after this kid.  It is not an uncommon instance and many people I know have similarly had parents assist them.  Just as many however have their parents refuse to pay more fees and yank the kids back home with a good telling off for being lazy, unmotivated twerps wasting their opportunities in life.

Another of many recent hit pieces on hostels was published in the ODT.

I lived in the halls in 2013, and all but moved out to live with my partner for a few months and Sonoda never noticed I was gone.  I continued paying for the room at the end of the corridor, and slept in a flat a few blocks away.  Occassionally I went back to pick up clothes.

Weeks went by and apparently no-one missed me. There were no calls, no messages. Eventually, a student who lived on my corridor texted me to see if I was okay.

Because maybe Max Towle just maybe they knew you were a stray rootbag who liked to have his own business minded and people actually saw you grovelling back for the walk of shame for your clothes.

Mason Pendrous was by all accounts a gamer who stayed in his room a lot.  At my student hostel I had my own TV and video player and barely left the room for similar reasons.  I would frequently eat elsewhere because the food was so bloody terrible and because I was solely focused on getting the hell out of University as quickly as possible, I took on absolutely zero extra-curricular interests forced on us by the hostel, silly toga parties or pub crawls.  If I was harassed for attendance or check ups, I would have given the RA a complete ballocking for knocking not the door.  Being forced to participate in all these activities would have made me anxious and depressed.  I qualified academically for University when I was 15 based on receipt of 6th Form marks but didn't even ask my parents if I could skip town then as there was no way I was ready to do it as a 16 year old.  By the time I hit 17 however I couldn't wait to get into it and that was when I was ready to.  Some teenagers are not ready then, and maybe won't be even at 18 or 19.  Parents however seem hesitant to say no to letting them go as they follow all their friends like sheep to the next station in life.  Frequently this means they all decide to go to far flung hell holes like Christchurch or Dunedin rather than stay close to the comforts of supervision of home.

Starting University is a stressful time for all students. Some deal with that better than others because they are better prepared for it.  They have lived independent lives for a year or two in preparation and can't wait to leave home or the small towns they are from.  If they are ready and confident about this, it all works out swimmingly in the new big pond.  Over the years though as numbers seem to matter rather than quality of students, academic standards have dropped so much for entry into courses that there are thousands of students attending who really should not be there in the first place as they are not smart enough.  Added to that mental health problems, depression and anxiety abound by not achieving good grades, it is a recipe for disaster.

It is about time parents took some responsibility and assessed whether their little Prince and Princesses can cope a) being at University and b) boarding away from home at University, and parented up likewise.  School results are but one measure of this, the teenagers mental health, maturity and capability to enjoy the relative anonymity away from being some sort of school legend, are the others.