Jones Triples Down on Indian Community

- November 05, 2019
Shane Jones got wind he was burned in effigy by the Indian community as told to Heather duPlessis Allen.  He erupted today by not even doubling down, he went straight to tripling down.

I have another explanation for his mis-understanding.

Indians have recently celebrated Diwali the last week of October and they have legendary displays of fireworks for it.  One of the things they do is burn a Ravana effigy.  During Diwali the story basically can be summed up with people lighting lamps at Diwali to remember that light triumphs over dark and good triumphs over evil.

Here is what a Ravana effigy looks like, similar? 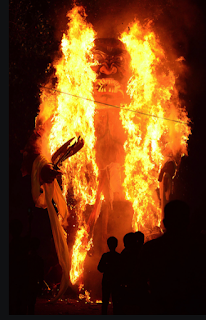 The timing of Diwali coincided with the Indian Association demanding a public apology from Jones.

Jones however took it personally and thought that they were burning him, not the terrible demon King.

Because yes Shane Jones, racism can never happen at all between people with darker skins.  Ever.

Calling the Indian Communities concerns a "Bollywood Over-reaction" is akin to say I don't know, Don Brash calling treaty protestors uppity Maori.  We know where that would get Dr Brash.

Labour are running a mile from this, meanwhile Jones' leader Winston Peters is still remembering what date it is after alleged printing his birthdate next to his signature on a form to collect Superannuation.

Upsetting the Indian community isn't such a smart move, particularly dying in a ditch over their arranged marriages when many last longer and are happier than ones that other people arrange themselves.


For most people, partners were ideally chosen from within the hapū or iwi group. Marriages were often arranged, with children promised in marriage from a very young age. People also sometimes found their own partners, and would then seek agreement from senior members of their family.


Jones, le Grand Poo-bar on everything Maori, also should read up on Maori history as he might find references to arranged marriages being rather customary amongst the Tangata Whenua!