- November 14, 2019
Speaking about crisis, how about this one in the Coalition? Finally Labour have had enough of having the piss taken and have acted with some belated dignity and honour.

On 7 November, government ministers met to consider the application. A spokesperson for Mr Jones said the minister was at the meeting but left the room for that agenda item and the decision to reject the bid was made by Labour ministers Grant Robertson, Phil Twyford and David Parker.

Did this event coincide with Shane Jones acting as if he was under man o pause and turning completely rogue? 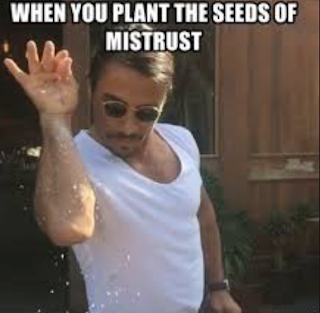 Full (belated) credit to Ministers Robertson, Twyford and Parker where it is due. This story is astonishing as much as it is disturbing considering this billion tree growth fund for planting everywhere was the price of the coalition negotiations with Labour.

Every politically motivated and connected Tangata Whenua in New Zealand appears to have a hand in some pie in carbon credits and trees currently. A bit like the honey fad. Sadly they will learn that like manuka honey, tree planting isn't unskilled labour and management and it is harder than it looks.    Oh and also someone has to get off their ass and actually do some hard physical work. And carbon credits are full of much larger scammers in life than their own capabilities can handle.

It is just astonishing that anyone related to NZ First could be so blazenly open about applying for almost 10 per cent of the funds available of $1b to be involved.

Absolutely jaw dropping even, so much so there is no need to write more on it. Chris Bishop needs to keep pressing for answers on the issue.

And the real issue for the privacy obsessed Winston Peters - as you all learned in Dirty Politics, people do not act necessarily to request an OIA without a solid inside tip.  No one from the political right would have known about this so who has been tipping off others to do an OIA on this one?

And is our "part-time" Prime Minister Jacinda Ardern a tad more hard-working and rat cunning than we give her credit for?