To Russia Without Love 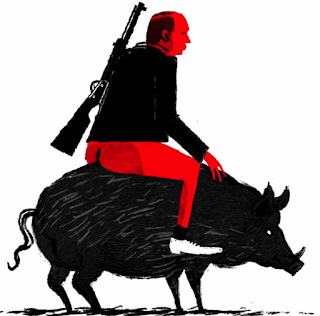 The day New Zealand needs to be lectured about war crimes from RUSSIA will be the day........well I do not know of a relevant end to the ridiculousness of that.

At a press conference overnight Thursday, Russian Foreign Ministry spokeswoman Maria Zakharova said New Zealand must investigate "crimes".
In the press conference, Zakhrova spoke about Russia's involvement in conflict in Syria - where it has been alleged that Russian planes have bombed civilians - before discussing allegations of civilian deaths the British military has been facing.
She then described the "murder" of seven children "as a result of wrongdoings of New Zealand military who did not de-mine in the proper way the shooting ranges after using them".

Murder? How about STFU.  It was more likely the Russians are responsible anyway.

The Stuff Circuit documentary did not suggest any deaths amounted to murder, but revealed the deaths had been linked to New Zealand operated ranges.
Zakhrova said that it seemed "these crimes were done because of their attitudes towards locals, their disrespect towards them. These are outright attempts to hide this fact".
"The attempts to hide such facts generate the feeling of impunity," she said.

How about the Stuff "circuit journalists" and the Hager/Stephenson axis of extreme stupidity, reflect on what their nonsense sensationalising of matters  in far away lands brings and how they're hardly patriotic New Zealanders responsibly reporting matters.

For Paula Penfold it means another otherwise meaningless award in the small NZ market for the few niche readers who bother reading through the emotionally driven waffle and follow up Womens Day piece.  There again we can read of her holiness as she and her lovely ex, the teleprompter reader Mike McRoberts battle it out now to see who has moved on with their life more spectacularly than the other, without each other:


"When the mothers came up the hill towards that cemetery, where their seven children were buried, and started kissing the gravestones and kissing the flags and crying – I just had to walk away. I couldn't handle it. I cried like I have never cried before on a story," she recalls.

Give me a bucket.

Claims and hands out for New Zealand to be responsible are one thing as is funding Deborah Manning's woke, pro-bludger/refugee opportunist business, their "evidence" of which most is highly questionable, is now being used by foreign nations to attack New Zealand and tag us "murderers".

There is a word for that to describe that rhyming with reason.