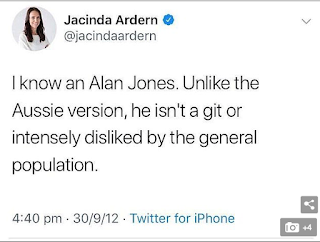 Those of us on the right learn quickly of the absolute rubbish that are sanctimonious claims that the left has a monopoly on caring and is all sweetness and kindness. Two examples popped up today and smacked viewers in the chops. The first from Jacinda Ardern, Princess of Sanctimonious Niceness.  It seems that she once when she did not rely on her kind mantra, was actually less than kind about Australian National Treasure Alan Jones. Thank god he didn't lose his radio show for what he said about her.  Because she didn't lose her job about what she said about him.  Far from it.  I don't care how long ago it was, because when a member of the political right say something the left trace back to the first dump you took unannounced in a disposable nappy, to prove how "nasty" we are and with it how kind they are. New Zealand deputy prime minister Winston Peters was quick to jump to his leader's defence and described the tweet as out of char
Post a Comment
Read more
More posts