Showing posts from December 3, 2019
Show all

60 Humans Die Needlessly And There Is Outrage About A Cartoon? 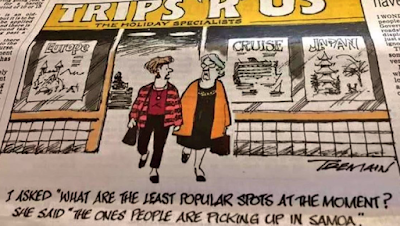 Sometimes I just have to wonder how thick people can be when they express blame and anger. Samoans are facing up to burying 60 people from measles, a lot of them babies.  Measles is an entirely preventable disease.   Contrary to the outrage today on a slow news day, they have not died because of a cartoonist or the Otago Daily Times.   They are dead primarily due to ineptitude from Samoan politicians and local leaders after a couple of babies died when nurses stuffed up administering the vaccines incorrectly.  That was in July 2018.  Since then those in charge seem to have done absolutely nothing to quash the fears relating to this and general apathy and vaccination rates fell to only a third of babies.  Vaccinations were actually suspended temporarily as a result.   The "they" I mean here is not only the Samoan government but also the useful idiots protecting them in New Zealand who did not see that our problem in October this year would soon be theirs
3 comments
Read more
More posts