Auckland - It Will Be Nice When It Is Finished

- January 24, 2020
Nikki Kaye has clearly been away all summer and having just returned to Auckland CBD has seen what a clusterfuck it is.

The whole CBD appears to now not be run by the Supercity or politicians but road cones and the village idiots who police them.  Those of us here over summer have suffered the indignity of disruption for a month now.  I am not talking about drivers, I am talking about just walking around Greta Thunberg low emission style.

I spend a reasonable amount of time per year in Sydney so over the years have suffered the George Street debacle as they put in the slow speed trams.  I feel for the poor retailers on Albert Street for the same reasons. The difference of course is that this is what the Keepers of the Cones look like in Sydney.  Many are students or at least persons of above average intellect and appearance.  I can offer the comparison as someone suitably qualified.  Also as a female I can do this in a way that I cannot be accused of sexism.

These are the Sydney gals. 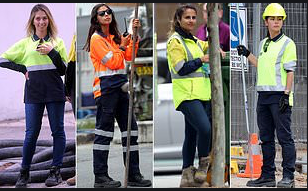 I will not shame the New Zealand offerings picturing as to what is on offer in Auckland from the contracting companies around the city.  Needless to say the persons appear to be those who a) not only have never done any physical work on a construction site in their life but b) have an IQ of a retarded garden worm and c) quite possibly have never participated in any form of activity before other than non-competitive KFC eating.

Generally the Sydney "Keepers of the Cones" are pleasant and friendly and not too demanding if you decide to ignore them.  They stand often in 35-40 degree temperatures over summer in ridiculous health and safety gear.  They're paid a relatively small fortune for this.

In Auckland I have been yelled at in a language I barely recognised as English, told to walk a certain direction when it was actually not as safe as my jaywalking and scorned at by morbidly obese, sour, unhappy derelicts of society.  Most whom cannot look after themselves let alone be entrusted to look after the health and safety of members of the public.  On Fanshawe Street I was chased by a scruffy looking thing incensed that I was (safely) walking on the road as bits of construction were flying (probably illegally) off the building development he was a worker from. It was the only time I had to remind the twit he had no legal right to prevent me walking wherever I wished to as he was not a policeman, he somehow had been promoted to health and safety officer and I was in charge of my own thank you very much.

Someone is coining their per hour rate as if the Supercity is paying similar rates as the Sydney ones are, none of it is trickling down into the quality of recruitment.

Everyone in Auckland knows that to get around Auckland at the best of times you have to jaywalk.  I am internationally qualified to know that Aucklanders by comparison suffer very small amounts of traffic and this jaywalking is completely safe.  Yes stop whinging you have bugger all traffic compared to large world cities.  Especially this last month when most Aucklanders have been on holiday.  The light phasing is some of the slowest in the world as well. 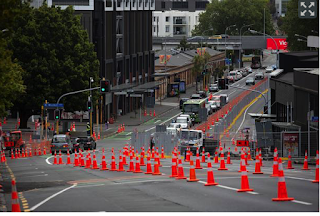 This is by far the worst debacle outside Vic Park Market and I have had to navigate it almost daily. The workers here need to be fired and replaced with school children as they would do a better job.  They are not only rude, they're utterly hopeless and have confused not only motorists but pedestrians.  I have not driven a car around Auckland I have been walking and that is bad enough.

They have absolutely no respect from pedestrians and despite several standing on intersections at any one time it is a perfect rendition of Dumb, Dumber and Dumberer.  The cones change all the time and the first day of this debacle I witnessed a car actually head on driving towards another.  I looked at the intersection and the car was just following the cones.

The frightening thing is that The Herald has published roadworks that are all happening at once. 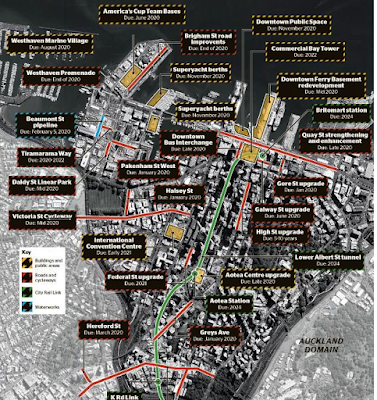 There is of course absolutely nothing that politicians can do about this as they have allowed it to happen! The Americas Cup thanks to the organisers will be a very short window of inconvenience, unlike the last Cup, APEC will come and go but the largest disruption is from cruise ship passengers in and out all summer clogging the roads and streets.  They're not only fucking up the previously relatively reasonable serviced apartment and hotel rates, they're creating undesirable industries as a result.

Despite Jacinda Ardern's promise to clean up the streets of beggars and poverty and $100m to do so, I have never seen it worse as a summer tourist and I will tell you why it is worse.  The public transport now nicely and efficiently takes them all  into the CBD and like bees to a honey pot they are sitting waiting for cruise ship tourists to pop off their boats and part with their cash.  Instead of moving social services away from the CBD they are encouraging a charming convergence in the CBD.

Perhaps the politicians may like to assist poor corporates like Countdown Victoria St West (and some not so large) in the CBD move professional beggars away from their stores.  Go anytime and you can see their brand new polished sneakers and mobile phones.  I doubt they are actually homeless and I have seen a time another similar grifter attempted to take the space and it was WW3 territory.

You need to add all this up and the emergence of handkerchief over face wearing bikkies straddling motorbikes that an AML swoop should be able to prove that the source of funds buying the Harley Davidsons is illegal. ...........

It is a recipe for disaster well beyond the inconvenience of pre-planned works to make Auckland better.