Virtue Signalling 2020 Styles - The WAG and The MP Compete

- January 03, 2020
I like Hannah Barrett, she's always surrounded by beautiful people, has thin fabulous friends while always virtue signalling "body positivity" for other women she is never photographed near and is of course the wife of Beauden.  Every day it seems she wakes up and thinks first of her brand.

I also like that she does not let her sadness at social issues and feeling 'devastated" and "helpless" get in the way of her enjoyment to sink happy hour piss with her mates in Thailand with Beauden while he is on sabbatical.  Proper.

This brings me to the Australian fires, which are terrible I just put that out there.  However they have been happening for as long as I can remember and every Australian I speak to in Sydney and around parts who has a practical, manual job or has common sense (in other words is not a Greenie or hipster) will tell you immediately the situation is now made worse that the lobby groups have successfully prevented controlled burn offs.  The leadership fail in Australia Labour and the Libs has been going on for years - bending over for the Greens.

Oh yes and Sydney is often really really hot.  Like many parts of Australia.  Again for as long as I can remember.  If you are a tennis fan and watch the Aussie Open there is no way you cannot understand this.  The history of bushfires is outlined here.  Some perspective is crucial if you look at the table.  Imagine if we had social media in 1974-75 with the Northern Territory fires? I remember as a cricket fan various "bushfire appeal" matches this time of year, the most memorable was in 1983 where our team returned to Australia after the infamous Cairns six sixes, to play a match that we actually won.

Scomo is taking a terrible beating currently however just like Hannah, what the hell is he actually meant to have done? He is a male so cannot go around hugging people, it just looks strange and  Trumpey gropey.  He looks as athletic as a librarian so is not exactly capable of manning a hose and he is religious so probably deep down believes this is all part of God's plan for us.  The government is providing as many resources as is needed. Australia is a wealthy country capable of paying the bill and New Zealand doesn't "have their back", they can manage this and still have ours.  Australians are also capable, strong practical people the further you move from the cities.

"Your country is burning" are the emotive bits of crapola on the net now.  The problem is that it is not.  Large parts of uninhabitable scrub are and small towns around this.  Headlines are sensationalising just where the fires are, pumping out diagrams that to those who have never visited Australia or have an IQ below 100 would confuse it with the whole country burning.  Half a billion animals apparently have been killed.  Based on what? A census?

Which brings me to our Labour MP Deborah Russell. 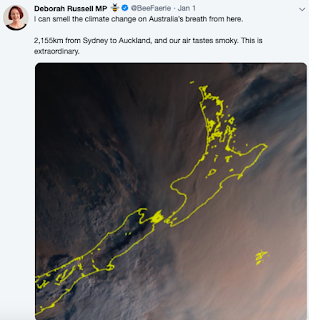 January 1st, Auckland's air was smokey? You are fucking joking. Seriously, was this woman next to the hair of the dog joint from next door out in Titirangi?  I am a non smoker, I was as dusty as hell on January 1st after impromptu NYE celebrations with the neighbours in the city and hello, I do not recall the air being anything other than a freezing blast to my hungover head when I slid the doors open and sat on the deck with my head between my legs deep breathing to the Gods of Champagne.  But here the struggle is real for Deborah as she scrambled the next day around her middle class beach walk.   Poor petal.

Aucklanders may think they have been affected by smoke from Sydney.  It has been blowing a gale here for days on end in shithouse temperatures reminiscent of autumn and any air would have quickly moved on.  It seems to be a new thing, guilt ridden Aucklanders who have achieved stuff all in life other than inheriting or accidentally buying a house or marrying in the right suburb, seem to attach themselves to every disaster in an attempt to make it, well, all about them.

Global warming? Climate change? It is all just a thing our ancestors called "weather" and at the moment Auckland has yet to start its summer as we have winds that would snap the AmCup boats should we roll forward 12 months.