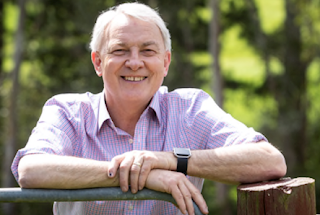 Collins and Goff have held similar portfolios in senior positions in politics with equally sensitive material.  Goff from 2007-19 in Defence and as Leader of the Opposition and the Mayor of Auckland with Collins in Corrections, Police and Justice.  In the case of Collins it was deemed to be in the "public interest" to take these illegally obtained emails and publish them everywhere, out of context and without a chance for her right of reply.  Collins' emails did not number 15,000 and she did not forward them to her own personal account which in itself is prima facie illegal.

Goff, a favourite of the NZ Herald, seems to have had not only a heads up, time to get lawyers involved and threaten legal action.

Goff is no longer Labour leader, or in politics in the Labour Party (we are told), but he is a Labour Mayor and these emails are historical back to the times he was in charge of everything. Claims these emails will be boring are ridiculous.  They will cover periods Goff was integral in Defence matters and Opposition politics and donations.

The NZ Herald ran a couple of articles proving how righteous they are in not paying $20,000 for this treasure trove.

Seriously? If this was the UK and a former leader of the Opposition and say London Mayor and the Daily Mail, they would have paid the money and dumped as well as published the whole treasure trove until everyone in those emails bled from every orifice.

Any Minister or Political Party leader who signs an email off:

Team all emails should be on personal addresses or those that cannot be subject to an official information request.


Team? Should this then meet the public interest test in publishing absolutely anything sent to that address as prima facie everything done was on purpose to circumvent the OIA?  It would also assume that emails sent to that address are explosive enough to put Mr Goff out of a job if ever released.  After all, give anyone a month or two with emails from politicians and they can make more than $20,000 from publishing a book.

Is that the problem the NZ Herald has? Paying for material to profit from? Because their clickbait might have made them more than $20,000 at the weekend explaining how bloody righteous they were.

There is nothing different between paying $20,000 for emails than it is openly accepting them under the guise of being a "journalist", taking all the legal protections of being a "journalist" and then profiting from writing up a book. The anonymous seller of the emails is obviously gaining more than $20,000 of enjoyment or personal gain from them.

I laughed at this one. 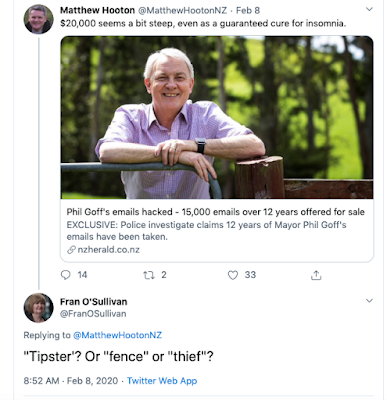 Well she had no problem wallowing in emails from a criminal who obtained information illegally, in an attempt to prove her righteousness when right bang smack in the middle of it all caught conversing deeply with the Dirty Politics crew feeding and feeding off trades in information, didn’t she?

Matt Nippert = silence, after being what Vodafone could describe as "balls deep" with the Dirty Politics maestro, he's now too busy making stories about Peter Jackson while at the same time saying how great Taika Waititi is when Taika got his big break from NZ taxpayer subsidised films. Nippert’s work is best found now making snide remarks on Twitter, as the product of his day job, like that of O’Sullivan is conveniently hidden behind a paywall so we don’t have it shoved in front of us every click.

Patrick Gower = well after conversing for years with the Dirty Politics crew as well, he has found God and does boring docos giving him an excuse to mourn over marijuana.  He is now claiming he hated his gotcha days in politics.  Yeah right.

Nicky Hager (aka Mandy's twitter account) - NOTHING, like every other woke liberal Mandy is trying to save a radio station she doesn't actually listen to. And sneering at the National Party.

I am awaiting the "hacker" to release the emails anyway so the media will be forced to report them as competitors will if they do not.  Surely market forces will ensure that happens?

If any emails run parallel to the “hackers” political or personal motives such as I don't know, Goff's time as Defence Minister or anything he has done against their interest in other portfolios, it could be not only in the public interest but very interesting to the public.

Let us see how the woke and hypocritical leftist media in New Zealand handles that for their beloved Labour Party.

After all, some of those emails could contain links to I don’t know - oh the current Labour apparatchik running the show?