America's Cup in Auckland? - Stick A Fork In It As Well Done

- March 23, 2020
A useful guide online lets us see the progress of the 36th America's Cup. Sinking faster than this memorable moment. 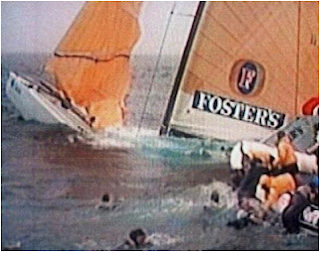 And to the key dates for the event itself

Now Team NZ's boat Te Aihe has to return to New Zealand and this will not happen before June.  The sailors themselves will be in lockdown for a month til at least April 25th.  Maybe longer as I cannot envisage everyone will suddenly be allowed out in the wild when the one month is up to go back to business as normal.

Newsroom had a very light story on this last week.  It was nationalistic and reporting-lite.

Sailors from other teams will need to arrive in New Zealand in say by September.  Who is going to say if flight schedules will return to allow that?  Who said New Zealand will allow visitors to the country without going into a strict 14 day quarantine by then, especially from the UK and Italy of all places?  The extension of visas of people already in New Zealand and stuck there for 6 months is a fair indicator that this is the expectation Ardern and her team have that people can fly in or out of New Zealand for.

The much larger problem (given you know the Italian and British sailors have all been on strict lockdown as well) - are the sponsors.  Many of those sponsors have lost hundreds of millions of dollars in net wealth this last month, corporates have lost billions.  Emirates even itself as Team NZ's sponsor, took and will continue to take a super nuclear style thumping.  World stock markets have tanked, funds have run dry, loans will be called up and international asset prices are about to in many case tumble.  None of this is suddenly going to return immediately when Coronavirus eventually subsides and they now after the worldwide QE-to-infinity run, we have further systemic problems in the banking and finance system outside of the free market.

However the largest of the problems is this - the tone of the event itself.  Construction will have to cease while Auckland is in lockdown.  Projects will be late.   In December, there will undoubtedly not be more cruise ships visiting, there will not be tourism flowing in New Zealand.  New Zealanders themselves would have had a hell of a year either way. Some may say an event like the Americas Cup is just what we need to let our hair down, party and celebrate some success on a sporting arena.

But who is going to want to do that?  Answer - not even the largest wanker in Auckland.  That is the answer.  After a year of being in lockdowns unable to travel beyond Auckland or your home area, the first thing any Auckland will want to do is get the hell out of dodge come Christmas time for anywhere open outside the New Zealand borders.  There will be a mass predictable exodus of the sort of people who usually enjoy these sorts of social events.

Aside from Formula One there is no greater example of the excesses of wealth than the America's Cup.  From the boats themselves, to the spectators then down to the boating industry surrounding the event.  Bars and restaurants in Auckland by then may have been driven to the wall with months closing, total lack of tourism and trade, staff redundancies and then of course coming off a winter from hell for every other reason.

The event definitely has lost its mojo.

I wonder when we can stop pretending that it is going to happen?  And if it does not happen in 2020, the America's Cup may be replaced by a less pretentious, stripped down version that actually focuses not on technology but sailing.