Quarantining When You Are Rich vs Poor

One of the leading proponents in New Zealand is last weeks co-Wanker of The Week, Anna Mowbray, billionaire Chinese toymaker.

Here is Anna enjoying her self-isolation in what looks like the former Kim Dot Com mansion grounds they now own. 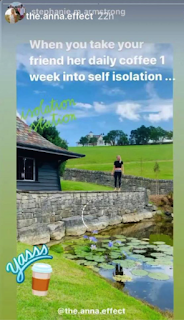 It seems - with her children! (who I won't post a picture of) 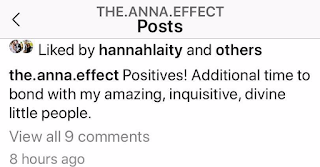 The rich have all prepared, stockpiled and have decided on their selection of homes including beach houses, in which best to hunker down and stay away when the inevitable happens.  They want it to happen sooner than later of course and do not mind being away weeks even months.

But imagine quarantine style lockdowns here in a studio flat in Auckland.  For an indefinite time. 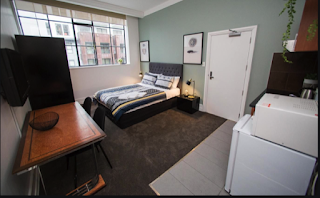 This is why Italian style has to be the last resort.

The mental health concerns of shutting people away in tiny homes and apartments has to be greater in my view than the risk of illness itself.  Don't think so? Remember this post in a few months.

The people who yelled that Trump is a fascist are now pleading that he should be one.  Ironic.

And hot on the heels of yesterday's post about Maori revolutionaries shutting off roads, today John Hatfield aka Hone Harawira just "oe-upped" him with this:

He is going to lockdown the Far North!  And use Maori muscle to do it. 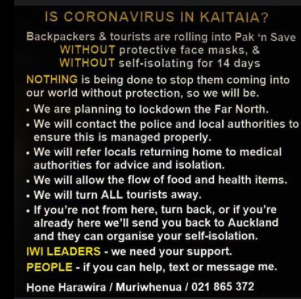 I like this "we will contact the police and local authorities to ensure this is managed properly"!!

The Police may like to inform them of the illegality of this and while they are around at the vigilante thugs homes, have a wee look around for firearms.

But of course they won't.

This is what happens when people do not trust politicians, they take matters into their own hands.  At least it will give the Police something to do during this debacle, now that they won't write speeding tickets or have to attend to so many car crashes with people locked inside.

They can go wag their fingers at John Hatfield and tell him off.