- March 21, 2020
This made my day and I announce Rawiri Waititi as the Leader of the Revolution against this  batshit crazy lockdown. 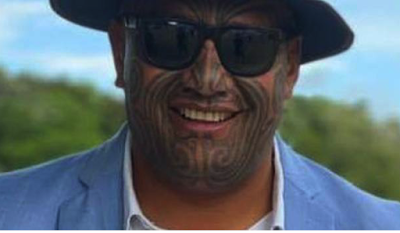 "The evidence that we have in regards to the impact that the influenza had on our people in 1918 and what we're trying to do is mitigate the risk of that happening again," says iwi leader Rawiri Waititi.
"It had catastrophic implications on our people."
The iwi is terrified the worst could happen if COVID-19 spreads to their community.

They plan to shut off State Highway 35, only allowing access for residents.
Police have issued a statement saying: "We know the community is very concerned about COVID-19, but this is illegal."
The Prime Minister preferring to stress the risks that every community is running. But her message was listen to the advice from health authorities, and do not panic.
"Just think about your grandparents, think about someone in your family group or friendship group who might have compromised immunity," she said.
"It's not just about if you're worried for yourself, its that you should be worried about those around you, so please take it seriously, it's about saving lives."

Rawiri Waititi is simply following Der Fuhrer's orders.  He has no confidence in the politicians and is taking matters into his own hands.  I love it.  I love it a lot.

An eastern Bay of Plenty iwi has announced it will enforce 24-hour a day manned closure of its borders to all outsiders, in an effort to protect its vulnerable community from Covid-19.
In a post on the Te Whānau-ā-Apanui Facebook page last night, iwi leader Rawiri Waititi announced no one outside of the about 1000 residents would be allowed to enter the territory from midnight March 25 for two months.

He is thinking of his community.

The fact it is illegal and the Police have said so is irrelevant.

- So was Pania Newton's actions occupying land owned by a major corporate and the Police did stuff all about that.
- Taking away people's rights and liberty when they have done nothing wrong, is usually illegal as well.
- Putting a Nation's fit, young, healthy individuals on home-D for the only crime that they may get a bit sick, is usually illegal as well.
- Ruining shareholder value and with it the livelihoods and incomes of hundreds of thousands of workers in those industries usually gets you at least in front of the SFO or FMA in New Zealand.

Waititi's actions in a time of national emergency can possibly be just as justified as Der Fuhrer's.

While Jacinda Ardern was in Australia on holiday, and Scomo was in Hawaii as bushfires were raging, absolutely nothing was being done about tourists entering New Zealand and Australia from China.  Other Asian countries you may view as third world had already banned the tour groups and individuals and were screening arrivals.  Those tourists then decided not to go to those countries and visited down under and other places that did not have these rules.

Either the health authorities didn't tell these leaders, remember probably the same people we are now being asked to trust.  Or they did tell them and no one did a thing about it.

Did her intelligence agencies warn her it was an issue in China.  We should have good intel coming from Asia at this time if the officials were doing their job.  Dollars to a knob of goat shit, Trump did and ignored it.

Our Der Fuhrer failed as much as every Western Leader on this.  All of them.  The big question is how much did they all know and how many ignored it and for how long?

So was she advised of this issue or not while she was in Australia on a holiday?

And when will the media stop fawning over her and ask these questions and run in some OIA's?