The Nanny State Vet Wants You To Not Walk Your Dog

- April 08, 2020
Apparently dogs are now being walked too much and crapping everywhere.

Good heavens where do we start.  But NO.

Christine Hahn, of VetENT in Washdyke, has noticed more dog poo on footpaths and is treating more over-exercising injuries since New Zealand went into Covid-19 alert level four on March 25 - and believes pet owners new to dog walking are to blame.

Well first up - clean up your dog poo.  One wishes owners were forced to pick up poo all day with their mouth if they are caught not cleaning up after their dog so let us solve that easily.  Next up.

Angela has a Rottweiler.  I was going to write a very long post that would venture into another TL;DR. All I can say is a picture tells a thousand words. 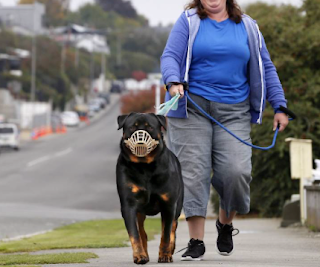 There is no way in sweet hell that this dog has been over-walked. I would put the fucker on F45 Doggie HIIT training as well as cardio of at least an hour in a large paddock.

Angus is given medication to treat anxiety and she puts a muzzle on her dog to discourage people from approaching and scaring it, Broad said.
She decided to stop walking Angus around the streets on Sunday after another dog spooked him.

I suggest exercise would help with his anxiety and depression.


As for that - who would have thought locking people up in their homes for a month would create boredom and depression in humans?

The nambies at Alcohol Healthwatch (whoever they are) are calling for all online alcohol sales to be banned immediately!

A new campaign called 'Drink Normal' has also been recently launched to encourage New Zealanders to stay safe.
Cheers! executive director Matt Claridge says: "Drink normal is about reminding parents they are major influences over their kids, and you just need to drink normal. So the old normal should be the new normal".

What a terrible campaign already.  There is no "normal".  This is not a "normal".

The director of Alcohol Healthwatch Dr Nicki Jackson says the risk is greater during the lockdown.
"We know from times of recession, when people are out of psychological distress, under isolation, they drink heavier quantities.

So hurry up and let people get back to work and back into their normal.

Fortunately we all know poor Jacinda Ardern has to be with her nitwit fiancee Clarke Gayford more than ever this month.

There is no way in hell she is going to want to be seen to ban alcohol sales, the stiffer the better from her normal whiskey.