Are You All Now Punished By The PM For The Black Lives Matter Protest?

- June 01, 2020
Jacinda Ardern was looking for an excuse to extend level 2.  Over the weekend with the Black Lives Matter Protests around the country she got it and your Police did nothing. 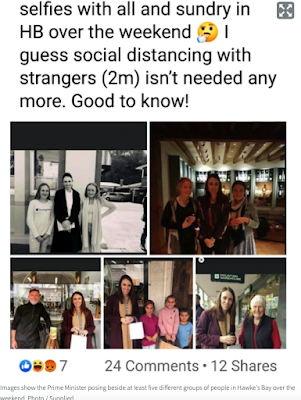 Instead after day 11 of zero new cases and only one active case (that is questionable anyway), announcing that there would be a no restriction level 1, she has delayed the decision to next Monday's cabinet meeting which would then extend it another two days at the very least that level 1 can occur so June 10th.

This of course gives 10 days for a case to show up from the cluster now that can be tagged the Black Lives Matter Cluster and extend level 2 longer.

Matt King is the only National Party MP calling it hard like he sees it.  Bullshit.  Todd Muller may claim the rules are confusing, but so is his limp dick response.  David Seymour is the one Opposition leader actually providing some opposition.  Muller's total non-response follows:

Muller himself would not say when New Zealand should come out of alert level 2.
"Ultimately, that is the advice that has to be discerned by the Cabinet," he said.
"They are looking at the health perspective, which is, of course, critical but also the social and economic perspectives which are increasingly critical – thirty seven and a half thousand jobs lost in a month.

Is he trying to not have a strong opinion on anything?

Bloomfield has also coughed to being in a photograph with strangers but says it was only for a moment.

I hope there was no coughing. 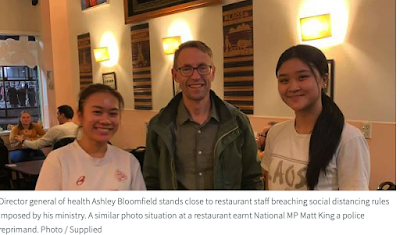 It is time for New Zealand businesses to just ignore all the rules because they are the only schmucks following the level 2 rules, everyone else is ignoring them from the Prime Minister down.

The only reason you are all still at level 2 with businesses bleeding cash and your rights still under the hammer is the Prime Minister has found yet another reason to delay and hold off.

Now advice is given the Black Lives Matter protesters do NOT have to isolate for 14 days! Well if they do not have to then why the hell are all the other restrictions on business and social distancing still in place?

Thanks the New Zealand organisers of Black Lives Matter for another almost 2 weeks of Noones Lives Mattering.  There can be no other reason for the Prime Minister delaying yet again.