Dirty Journalists - At It Yet Again

- July 20, 2020
So now JuCo is being attacked by veteran tusker Barry Soper for her handling of the Andrew Falloon "incident"?

Seriously what was she meant to do?
Viciously and publicly hang him?

Falloon is a young guy who clearly has issues in his life.  He has talked of his mental health issues previously even in his Maiden Speech, none of this is new, chuck in self medication with alcohol and depression meds and it is a disaster for many people, especially young sensitive men.

When I was in my late teens and early twenties three of my best friends took their own lives in tragic circumstances.
I’m sorry that I couldn’t do more for them.
It’s a feeling that doesn’t go away.

From the reaction today people who know him in his electorate are sympathetic and also know of him as a sensitive person, he's definitely not a Type A bloke.

Was JuCo meant to today front up and slaughter him titilating old tusker's like Soper with all the gory details?

Or was she meant to let Falloon have a day to suffer the indignity, be with his family and have a dignified exit?  Before she has to front to discuss it with media tomorrow in her usual slots.

Because we know what happened last time a young man combusted gruesomely in public in the National Party, and that ended up with him sobbing in a car looking at a train track.

I suspect they might have learned something. JuCo in particular as a close colleague of JLR in Auckland. 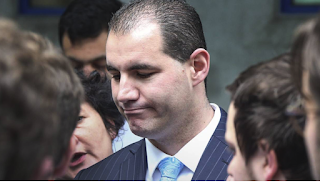 Collins is a very different sort of operator, she's rolled with the punches, has been down and out, but had come back stronger.
The softest part of Collins is her teeth and it's time for her to start gnashing them.

Her handling of matters today actually proves again there is no more nasty. Soper was advocating the "gnashing" of her teeth?

If anyone believes JuCo's face would be anything but shock, horror and fury when she heard about this or saw the picture sent they really need their head read.  Fronting up to her would not have been pleasant for an MP.  Second only to fronting to their wife and mother.

Meanwhile the Labour Party, you know those of the Summer Sex Scandal, are carrying on like they are all patron Saints of Reasonabless?

Falloon has resigned.  What other pound of flesh does Soper want?  Or anyone for that matter?  The Police have already investigated it.

JuCo has shown compassion publicly to an MP who needs to leave and consider his life with his family and the support of his parents and hopefully wife.

The media on the other hand?  Went searching for the story, hunted down their sources until someone leaked to them.

The parliamentary rumour mill is now spinning out of the control and the National leader simply has herself to blame for oiling the cogs.
It's been confirmed Falloon sent an indecent photo to a university student.
To muddy the mental health waters in this way is simply unacceptable.

Did they harass the young lady who was NOT a school student, but a University student?
Did they get that straight the first time - of course not.  They goaded Falloon by letting it float around the place he had sent his own dic pic to a school girl and was some sort of paedo.  Where he then had to have it known what happened and allege that his phone was left unattended and a "Mate" did it.

Falloon needs all the friends he can get right now.

Better ones than those who apparently get hammered with him at parties and send text messages in his name to women with angry Labour supporting Daddy's.