Good grief, you would think the numpties running the stoners campaign at the election would get better spokespeople than this clown. 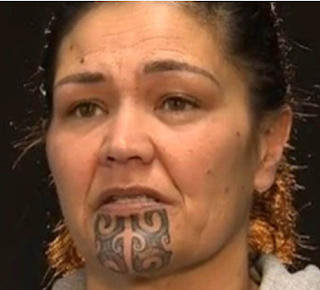 Tricia Walsh would have us believe she was imprisoned for weed possession.  She has become the current darling of the liberal woke media who sell victimhood to Maori.

Like many Maori who scream and dance that the law is racist towards "our people" it is the primary usually very serious crime they are put in the slammer for!  A quick google by adoring stoner media should have got to the cause of Walsh's grievances.

A rap sheet larger than an Eminem album.

Whitey didn't cause her problems, her own whanau did.  Then she didn't take responsibility for her life, had 3 kids by 19 and chose to be a gangster.

Just before Tricia turned 25 her partner and other mob members stole drugs from a chemist. That night her partner’s sister overdosed and died.

She did her best, there was food on the table and they were happy, but it was a lifestyle maintained by Tricia selling drugs. She had started to use methamphetamine.

Police eventually busted Tricia for dealing and she was sentenced to six-and-a-half years in prison at age 38.

She served three-and-a-half years inside and the rest on probation, after leaving prison in 2008 at 42. That marked her last stint in jail — six years in total over four different occasions from previous drug and assault charges.

She is now reborn into a rolemodel and race campaigner now at age 55.

“My life has been a lifelong education. I will be 50 next year. I looked through a sad lens for a long time and it took me nearly 50 years to wake up and see the world.”

Amazing that she still has yet to wake up despite getting pats on the head in the dunce class for being reformed.

The victimhood is still strong with this one. It is no ones fault but her own and that of her whanau that she was involved in gang culture, had multiple children she could never afford and then in prison.

She needs to own that and stop playing the race card and should be the last person claiming that Maori are disadvantaged in the justice system considering her recidivist offending. She’s another who thinks the justice system is so great that she volunteered for frequent flyer miles riding on it.