I am in two minds about the wage subsidy.  On one hand Cindy and co closed down your businesses for their own political gain and told you that you could not run a business in order to "stay home save lives". In the process risk ruining decades of sweat and success in your own and the future of your family.  In this case everyone should have got in and claimed as much as they could as competitors will be, so you cannot put yourself at a disadvantage. As directors you also have a duty to your shareholders to maximise all available advantage.

On the other hand, there are the likes of sanctimonious opportunistic pious pisstakers like Stephen Tindall.  The business community since March that I speak with have been quietly collectively choking on their own backwash listening to him carry on.

Tindall sucked up to Labour at the commencement of Covid-19 lockdowns and promised to assist to bring PPE and masks through his contacts.  The Mowbray's seemed to manage that on their own and a bidding war for attention and adulation resulted.  Tindall cheered the lockdowns and jumped up and before he had approval announced his stores would remain open for trading as an essential service.  This lead to mucho explaining to the market regulator when they did not have permission to and Cindy gave him the cold shoulder and continued to. Outplayed by the toy tycoon Mowbray's for the limelight and unable to secure favoured nation status as an essential service through his political contacts, Tindall packed up his smaller toys from the sandpit and went quiet after that, re-emerging only when he fronted a world-wide campaign to beg to pay more tax!

Make no mistake, The Warehouse may be a listed NZX company but it is still the multi multi millionaire Tindall family dynasty and cash cow that the trust fund kidults have to play with for their often woke, pet projects pretending to be successful independent business tycoons in their own right.

As much as Lord Stephen tries to distance himself from the operations of The Warehouse and indeed seems to finally be stepping down in November, he cannot while he owns so much of the company.

The three largest shareholders based on the last annual reports are Tindall himself at 27%, The Tindall Foundation at 21% and James Pascoe Limited 20% that is owned by another uber wealthy family the Norman's.  With a current market cap of around $750m, in other words 68% or more than half a billion  dollars of the company is owned by families who can well afford to take a hit for the $68 million in taxpayers funds.  There may be no dividend paid by The Warehouse this year but again these families can afford that, they should have to dip into some of The Warehouse cash reserves and trouser the hit on their own books.

Tindall's son Robbie now holds the seat on the Board while Lord Stephen takes a "leave of absence" til November to pretend he actually has some control over Grant Dalton and the Americas Cup governance.  The kids are running around doling out Mummy and Daddy's cash to "start ups" and loaning the goodwill to chosen businesses who can name-drop brand Tindall as a cornerstone investor to sucker other punters into investing in high risk projects. The Tindall Foundation itself is a load of PR ballocks and a simple vanity project.  Many uber wealthy families give away more in New Zealand over that time period, but do it without constant fanfare and adulation.

The Foundation is the "be kind" wing of a company if you like, that managed its dominant position in the New Zealand market by smashing Ma and Pa shops all over the country and humiliating its staff with ridiculous bright red uniforms and famously low pay.  Allegations surfaced of workplace bullying and an empire built on cheap, environmentally unfriendly plastics from China.  It is a bit late now you are loaded to start preaching about "financial citizenship"  having profited from all the things you now want other people to change their behaviour over.  At one point remember Tindall asked staff to take salary cuts due to Covid or face more redundancies!

Added to this, The Warehouse "restructured" its operation and has been dumping workers.  The Unions have quite rightly called them on that while taking the subsidy. Victims of what was called  "Project Agile" currently without work will be spitting as none of this is consistent with the Project "Be Kind" for Tindall's public image.

"When the company has obtained about $52 million worth of wage subsidies from the government in recent months, it's the wrong decision to make. The reason those wage subsidies exist is to prevent job cuts." She said the union presented a petition signed by 5500 Warehouse customers but was ignored by the management.  "We're also disappointed that the company not only ignored the views and concerns of their workers but customers also."

Tindall's mask mate Nick Mowbray was silent on Tindall and The Warehouse. It was a curious omission that did not go unnoticed by the media as a brush through.  Yet again however no one has really pressed Tindall on it.  He has his pie in so many holes by now he has people feeding from his hand in business so that no one seems prepared to give it a proper bite.

The Tindall Foundation claims to have given away $185 million since 1995 and makes a song and dance that it paid $134 million in taxes. I did not know why as charities are tax free, so had a closer look and they have mingled this reporting with The Warehouse dividends as "pre-paid taxes". Yes these are just Imputation credits so nothing special to see here and no need to itemise it at all other in publicity.  This number equates annually to just $5.36m on average in taxes for the 25 years from their various investments. A useful summary is in their accounts. 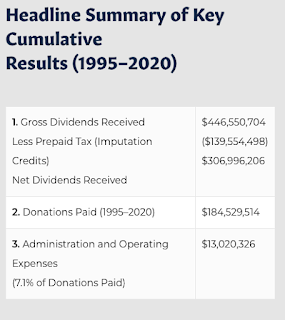 However this year alone The Warehouse have scabbed $67.7 million back in wage subsidy.  So looking at that on a scale that is 12.5 years of tax the charitable arm of Tindall's empire has actually paid. Their share being roughly 20% of that, Tindall's alone being 27% depending on how he structures his private affairs.

But forget this, the crux of the sanctimony and why I have posted on it and why The Warehouse should over other corporates pay the wage subsidy back in full right now.

He was loud about this and went very bigly in a Trump fashion, he was willing to pay his share and begged to be taxed more. The Millionaires for Humanity!  He fronted their worldwide campaign as again the People's Champion for New Zealand pleading to be charged more tax!

Yet here the company he founded and still owns and controls at least 48% of, is taking $67.7 million off other taxpayers and not returning it!  Do as I say and not as I do could not be better personified than this conduct.

The first chance Tindall has to lead the way on effectively leaving more cash in the kitty for less fortunate New Zealand individuals and corporates and what does he do?  He KEEPS money the government has given him from other taxpayers rather than trouser the losses himself and save the taxpayer!

I could continue with further analysis but I think I have made my point.  Tindall has ZERO credibility as a "respected" businessman in terms of the morality and social conscience he proudly chest bashes about until he pays back all the wage subsidy from The Warehouse and also declares what a prat he has been.

It is a joke and going into his "retirement" in November, this will be his last and enduring legacy in New Zealand business.

Do as I say and never as I do.