Thank heavens there is someone out there willing to confront feminists who have floated the nonsense that is "toxic masculinity".  No such thing exists. 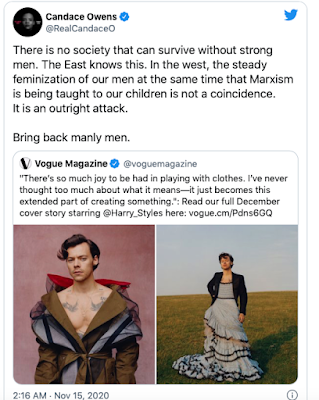 Harry Styles is clearly bisexual so not the best example for her to use, however the point remains.

The problem with the cucking of men that goes on these days by women, is that women are having to end up doing the job of men.  It is exhausting to do everything.  Let men do things that men are naturally better than women at.  Men are stronger than women physically thanks to testosterone. Let them use it.  Men are happier when they are achieving something. Let them do it, let them lift heavy stuff women cannot.  Men need a purpose far more than women do. Let them find one.

Owens has not been cancelled yet. Primarily because she is black.

A white woman could not get away with saying the sorts of things she does.  Which is good as a lot of what she says makes perfect sense. For those of you not familiar with Owens, read up on her.   Her latest book is very good.

It does make you think why New Zealand men are so depressed these days and lining up to front mental health campaigns.

A common complaint I hear from male friends of mine in New Zealand is that the women aren’t “feminine” enough say compared to our Asian counterparts. To which I remind them that if perhaps they actually treated her like she was a woman, she would be!

I know plenty of strong powerful women, without exception every female friend of mine is.  Many struggle to be in relationships with men because quite frankly - they cannot find one strong and powerful enough and do not want to settle for some version of a cuck.    Some women are happy with ordering a bloke around, but not many.  Those sorts are effectively looking for a bloke who in all essence is really apart from the ability to give birth - a traditional wife.  If they are happy being that then fine.  Not many are.

Women are attracted to men for home-making, stronger and more powerful than they are, we always have been.  Men however are ultimately attracted for home-making to women who, and they can claim not to be all they like, are not equals.

An "equal" cannot exist in such a societal power structure.

We are going through an awkward generational change as human beings from Gen X and younger where women are dominating in relationships, demanding more from men, getting paid more than men and men seem to be as miserable as hell about it.

Quite simply - women have worked out they really do not need men as much as previous generations did. 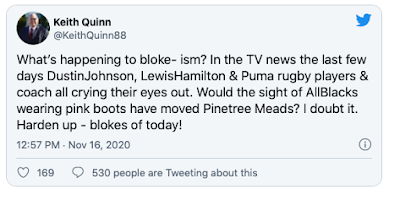 Telling anyone to "harden up" these days seems to be the social equivalent of attempted murder.

Every time someone dares question this order, they are cry bullied by the hoards on social media.  This lot practise bullying better than the likes of Quinn could ever have achieved in his tweet.

The poor modern men are not biologically designed to cope with these changes thrust upon them by toxic feminists and are confused as hell about it.

I feel now I have to post this, for readers to deal with what I have just typed, in case you know - anyone is triggered. 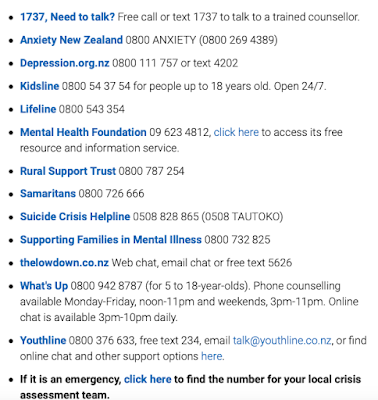