Cindy Cancels Christmas - But We Knew This Didn't We?

Oh shock horror, Labour have actually done what they said they would do and cancelled Christmas for many returning or intended to be returning New Zealanders. 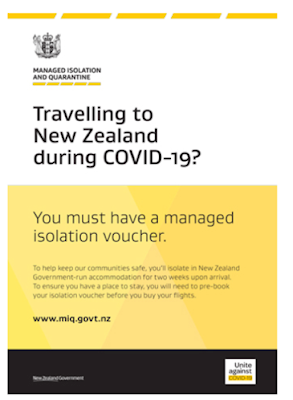 I spent hours writing about this for months, we knew it was coming right down to the voucher system.  The problem is and where Jacinda Ardern in one of her hundreds of media spots is to blame is that she REFUSED to front during the election campaign and tell the truth - quarantine spots were going to be limited and book early.  The campaign was relatively low key in telling us overseas about this however if you had even half your wits about you, then you would know to read the fine print in the Embassy emails and work it out yourself.

It really is natural selection if you did not.  From November you would need a voucher.  This was not perhaps clear enough for people who booked their flights earlier and have assumed the system would synch with the airlines and have the pre-booked persons as first priority.

The media between now and Christmas will be full of sob stories.

Israel Adesanya should not be one of them.

I like Israel.  I have tried very hard too.  He is very good at MMA and I cheer him on in his fights.  His appeal to me kind of ends there but he is free to gob off and do his own thing.

They all went to Abu Dhabi for championship fights and arrived back in New Zealand at the start of October.

I do not quite know how this worked with isolation and the rules, but they seem to have all had special treatment.  They were not isolating in a room solo that is for sure.  They had exercise and training equipment right down to the bikes.

Stories now have him back overseas!  He was only back in the country a few weeks after quarantine.

Adesanya travelled to the United States on 25 October with City Kickboxing teammate Brad Riddell to corner New Zealand's latest UFC signing Carlos Ulberg in Las Vegas.  They were scheduled to arrive back in New Zealand on Monday 9 November, but the recently introduced managed isolation voucher system meant they couldn't secure a place in quarantine until December 15.

So it is not like either of them booked their own flights, their managers cocked it up.  They’ve been far more humble about their cock up than the Peoples Hero.

It is pretty clear by now or should be that you cannot bounce in and out of New Zealand.  The Covid strategy is not built for it.

Businesspeople should base themselves out of New Zealand should they need to travel during Covid and so should sportspeople.  The rest of the world is a lot kinder to travellers currently. Again I wrote about this almost instantaneously, to stay away from New Zealand if you had any international business for the rest of 2020 at least.

But then this bad news would have needed to be fronted by Ardern during the election and that was banned wasn't it?