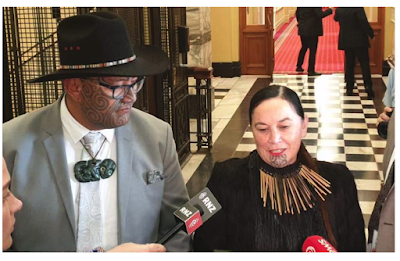 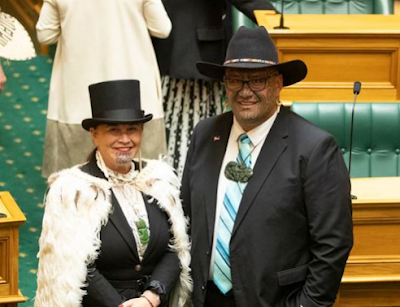 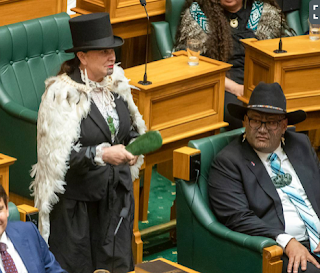 The signs were always there that the Maori Party were going to make a mockery of Parliament, just have a look at the headwear.  How would they like it if Pakeha sent along circus clowns to a Marae for a ceremony waving a blunt weapon?  Well they have managed the equivalent here.

What was absolutely disgraceful was the conduct of Tweedle dumb and dumber here.  Of course it was a race issue......not.

Ngarewa Packer said this was "yet another example of the Māori voice being silenced and ignored".
"We have walked out of the House to enable us to talk directly to our people about our vision and kaupapa as Te Pāti Māori," she said.

They have got two MP's, not 22. They didn't like their seating. Whinge. Didn't want to follow the rules regarding speaking.  Whinge. Racism. They don't like the oath..... racism.

No, Mallard was just following the orders and rules of Parliament and sat them down on their asses.  I am sure he had previously given instructions to the Party as to the details of the day, they just decided they did not like it so took the piss out of him.

Let us hope they keep their protests up and walk out more often.  This pair have little to add to proceedings especially in light of a very large number of Maori MP's in the Labour caucus.  There are Maori MP's who are proud to be Maori which is tolerated and then there is complete circus buffoonery as displayed today.

Meanwhile randomly I have just been sent the best picture of the day. H1 necking a glass. Courtesy of Newshub.  I have not dated this piece but if it was of her today, little wonder she needed a glass after that performance. 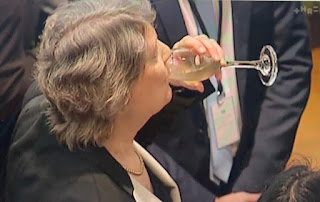