Alarm bells rang for me in the 57th minute.  A fluffy made-for-camera female sideline commentator possibly never to have kicked a rugby ball in anger*, informed us that a 120kg Polynesian prop has just returned from paternity leave.  She had glee in her voice.

Is this what male rugby has come to in New Zealand?  Seriously?  If it is not enough to have to listen to the grunting build up from oh too familiar mates requiring subtitles. 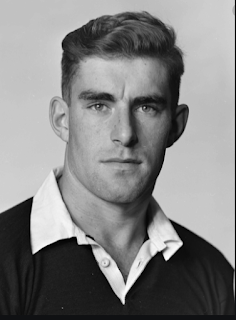 This is followed by pithy after-match fan girl interviews that do not get to the point as no one asks any hard questions.   I do not care how Sam Cane "feels".  I care that he cares that for the first time in history the All Blacks have lost to Argentina and the abject shame that should be attached to that.  I did not get that feeling at all.  WWRD - What Would Richie Do? He would not have been able to look at the camera.

"They probably brought more intensity," said All Blacks captain Sam Cane. "Their defence was outstanding.  "We couldn't really get our game going and put them under any pressure with the ball. Too many little errors and ill-discipline issues and they kept the scoreboard ticking over.  "We weren't good enough, which is extremely disappointing but full credit to them."

Hmmm....sounds exactly like the choking in the World Cup semifinal to a team that cared more then.

The All Blacks have played poorly before and still won.  Against a team that has not played for 13 months? Come on.  Two losses in a row?  To a team advised by Michael Cheika!
The All Blacks right now are a total shit-mess and it does not start with the coach or the captain, it starts with the infestation of political correctness that if the coach or captain were to correct, he would be cancelled.  There can be no Fergie hairdryer.  He would be taken apart on Twitter by bent wrist leftists, the NZRU would be boycotted by people who do not even play rugby, let alone watch it. A boycott of sponsors would commence.  The CEO would be "Raelene Castled". As would the break dancing Albino from Christchurch if he were coach.
Ian Foster cannot do a damn thing to change this culture of the Woke Blacks.  Neither could Scott Robertson and even a third choice Polynesian or Maori coach cannot fix this.
This is the new normal. No point replacing the coach and captain if the players have their heads elsewhere.
If you can get through the haka, there is no aggro and no fight in this team at all.  They peak anger at the haka.  They cannot handle any professional niggle because in their new world, niggle does not exist.  The world is full of kindness.
It started publicly with the prayer groups of separate denominations at the World Cup, Steve Hansen gave up, dazed and confused and fled.  It filters through the team with players encouraging their wives and partners to do such things as dominate headlines with their "plans to donate" breastmilk to a milk bank, they set up side hustle businesses trading cards and the others who think it is okay for their girlfriends to post f### you posts late at night on Instagram while partying when their man plays well. They express feelings they should be in the team when dropped the previous week for being average and again repeated the butter-fingers today with the try line and 15 mins to go.  The players post more feelings in their downtime, "miss you" posts.  Because a) no one has ever become a father and had to travel before and b) yes, no other woman in the world has ever given birth.
I have never seen anything like it in my career travelling internationally with businessmen and it would be stamped out immediately with a good corporate mocking by fellow travellers.  The All Blacks and definitely their partners simply do not appear to give a shit anymore about winning as long as the direct debits from the NZRU keep rolling in, they can bunk off to Japan and earn some Yen for their sabbatical and their social media branding is "Ka pai".  They are not minimal wage sufferers, they are paid more than their fans can ever dream of, live in homes their fans never will and have lives that their young fans could only wish.
They need to mentally harden the f*** up.  But we are not allowed to say that anymore.   The All Blacks make their cash off the field by appearing "vulnerable".  Oh, unless for years we suddenly find out he has been tough enough to have not worn a mouthguard.  That is now an international incident requiring more examination than the previous loss!
It goes through to the culture that the coach has to go public in a desperate assist for help to overcome this wokeness, and breaks the "what goes on tour stays there" ranks to tell the world that a player dared barge into his room and announce he would not quarantine in a room over Christmas.  All Blacks from the past must be looking on and wondering just what has happened.  Imagine fronting Grizz Wylie with this news?  John Kirwan to his credit could barely stand it but he is angry at the wrong personnel.
This is the NZ Rugby Union culture now.  Players now dominate management.  The NZRU is not doing anything about it because they cannot.
One loss to Australia we could take as fans, but to not only lose but get totally smashed by a covid-ridden side that has not actually played together for 13 months and unlike the South Africans turned up anyway? Come on.  So much for this "long covid".  The Pumas played like they had a vaccine of roids.
As I have blogged all year, New Zealand has lived in a Potemkin state of madness that because the country is doing so well competing against itself, that somehow it is a world leader.  It did such a good job of this spin that the world champion South African rugby team did not bother showing up.  On today's form they should have, they would have smashed the All Blacks.
If the country is doing so well then why is the Reserve Bank still effectively tipping in $28 billion into the property market?  It is doing so pretending to lend to business but any business owner right now will tell you without property as security you ain't getting a bank loan.  The All Blacks are the largest faux confidence indicator now mirroring what happens when finally the world is allowed to compete against New Zealand when borders open up.
It is all very well and good to live in the Super Rugby Ao-----tea---o----roa bubble but here is the truth, the rest of the world watch all those games of us bashing each other all year and works out how to play the All Black style of rugby.  The All Blacks need to play other countries with different styles to them because when we do, we struggle and get better.  Glamour rugby does not always win test matches.
The All Blacks need international rugby more than international rugby needs the All Blacks.
This should be obvious from today.
* For the record I can.