Woke Blacks Back The Wrong Horse

While watching the Woke Blacks fine win over the Argentina B- team this last weekend I had a brief moment of reflection as Sam Cane placed a Maradona 10 jersey over thick white lines on the field. 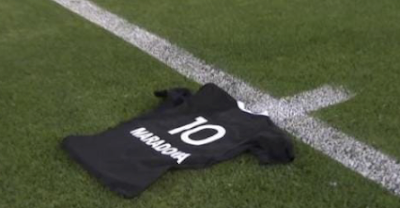 Everyone with zero historical knowledge of football (soccer) and rugby jumped on social media to say how classy the gesture was.

The rest of us with some institutional knowledge didn't need to even think whose dumb and dangerous idea this was.  Yes, TJ "pimp my brand" Perenara.  Of course it bloody was.

All Blacks captain Sam Cane says the heartfelt gesture made to late football legend Diego Maradona and Argentina before his side's Test against the Pumas on Saturday came from halfback TJ Perenara.

Nothing wrong with that from my perspective because he was a very good soccer player (not the best ever player as he is deified).  However this tribute from New Zealand Rugby, an organisation that loses its mind when Aaron Smith has sex in a handicapped toilet and stripped him of the responsibility of haka leading for that as well as a suspension in disgrace.  Our best enforcer Jerome Kaino was outed for the non-crime of having an affair and sent home from Australia the morning of a test tragically never to play again for the team.

But no, the All Blacks pay tribute to MARADONA.  The players then tweet and instagram stupid messages about how great they thought he was!

With Argentina there is still the mention of the Falklands to any of us with sympathy to our Mother country.

If England were playing Argentina at the weekend and England Captain Owen Farrell had performed this stunt, placing a SOCCER player's name of another country on an England RUGBY jersey, there would be a monsoon of sharpened coins falling on him from the stands at Twickenham.  Death threats would follow from more vigilant football fans who will never forget or forgive  Maradona and the "hand of God".

It was just bizarre from the Woke Blacks to do this.  Why?  No All Black with a history of Maradona's behaviour, who had cheated in the quarter-final of a World Cup and since behaved like a twit, would be allowed in the Club again.

Poor Keith Murdoch had to run away and die in Australia once he was sent home from an All Black tour. Maradona would have broken more laws in 5 minutes in a bar than Murdoch that entire evening at the Angel Hotel.

Then today we find out that the Argentinian rugby team are a bunch of racist womanisers! Of course from 8-9 years ago, still a hanging offence to the woke.

Just over two weeks after the flanker led the Pumas to their first win over the All Blacks, the Argentina Rugby Union “revoked” his captaincy and suspended him along with fellow players Guido Petti and Santiago Socino.

In his tweets, since deleted, Matera spoke of “running over blacks” with his car and disparaged Bolivians and Paraguayans.  One tweet translates as: “SOUTH AFRICA baby! I’m finally leaving this country full of blacks.. OUCH!!”  Another reads: “Nice morning to go in the car to step on blacks.”

Oh dear......this is why you do not mix sport and politics.