Not only is there tension in the Labour caucus with a powerful break-away faction of Maori MP's getting more pissed off by the second. Labour were shunned at Ratana and likewise will not now have a platform at Waitangi as the old middle class people spending all the Iwi cash on themselves, are too afraid to show up.

Hone is about to unleash this rag tag bunch finely group of highly trained and tuned athletes and professionals in full kit PPE gear on the people of the North.  To keep foreigners out or keep his own people in I have no idea and need not worry.

This be the sideshow.  There is zero evidence in modern New Zealand that Maori are too hopeless to handle an outbreak of Covid and hundreds of thousands of them will die.  I have more faith in them to do what they are told than Hone Harawira does. 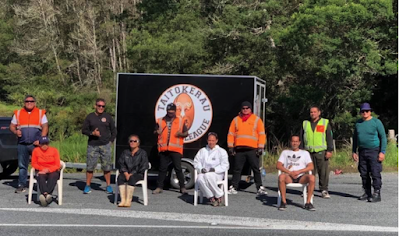 Today Hone jumped on the wireless with Heather du Plessis-Allan and casually threw the c-bomb out there - that two more people had tested positive.  From their contact tracing we can profile a strong relationship to BBQ King, Tai Ping Supermarkets and at some point there was a moment of oops and visit to the pharmacy where perhaps they realised sales of pseudo over the counter have ceased since the last time they visited New Zealand.  This didn't stop them, they continued interacting with the public.

HDPA was sniggering in disbelief at Hone's claims. So was I.  Of course it was a complete set-up and HDPA knew prior he was going to unleash this.  Have a listen here.

In short the roadblocks do not matter, just wave and drive through them if you come across one.  Those manning the lunacy will get out of the way soon enough.

They are a sideshow to the real issues.

What matters is that someone has leaked this information to Hone in the first place.

The "podium of truth" is now gone.  It is not a conspiracy theory that government is holding back information from its own people when Hone today proved that it is true.

This is the very sort of grievous error and leakage that stokes the fires of the Billy TK’s out there. What else aren’t they telling us?

When Hone Harawira is releasing accurate and more up to date information than those on the podium of truth are daily, Houston really does have a problem.

And it makes it 1 million times more powerful that a Maori radical Harawira did it cheered on by others in Maoridom and not the National Party whereby it would be dismissed as a publicity stunt and politics.

It is of course not politics and a PR stunt when doyens of the far left do anything.

Labour currently clearly have a terrible relationship with Maori and it will only deteriorate as Maori demand more and more from Jacinda Ardern and she will be forced again and again to back her new voters that pushed her over the line at the last election - old, rich white people who own multiple properties and are getting richer and richer on paper by the day.

Interestingly the Ministry of Health and Bloomfield seem to have worked a bit of overtime and sponged the media of any credit given to Harawira for announcing the new cases.  Siouxsie Wiles has done her usual pimping for the left wing politicians and explained how an outbreak at MIQ could happen.  Like Wiles, they could be "weak positives".

Very few are outwardly reporting as the scoop it is.

Happy organisations do not leak.  Let alone a left wing bunch of bureaucrats when there is a left wing luvvie in charge.