National Need To Decide Who They Are

Today was a total disgrace in the history of the National Party.

There are no votes for National in Ratana, radical Maori or then anything to do with Waitangi.  Why they even bother attending is a mystery for the political step dance for their annual humiliation.

Maori of the beltway jump up and down and then snigger at the Duke of Marlborough over piles of the Jesus juice about the wokeness of every Pakeha who bother to visit.

This year was the worst I can recall. Moreso that I expected better from Judith Collins.

Maori at Waitangi suck up to National when they are in government, National fall for it.  When they are in Opposition they are chopped liver.  Waitangi does not represent all Maori.  It represents as it always has - left wing or more radical elements of Maori. Most middle class Maori simply roll their eyes and get on with life.

It is a political foxtrot that if you participate in you deserve to land on your ass.

Judith Collins sat at Waitangi today and could not speak because she is a woman.  Jacinda Ardern got to speak as PM. Why wasn’t the same right accorded to Collins? 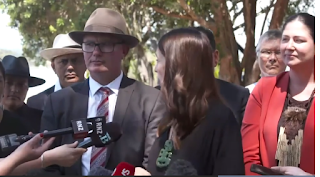 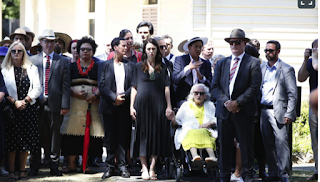 Fuck that.  She should not have cried like Helen Clark and she did not, she should have bloody got up and walked out.

Although National's leader Judith Collins and Green Party co-leader Marama Davidson sat next to Ardern on the mahau, neither were given speaking slots in the main pōwhiri and instead male MPs had to speak for them.

Plans for them to instead speak at a later event were scotched after everybody left.

National's deputy leader Shane Reti raised that diplomatically in his speech, saying the National Party were "saddened" Collins was not able to speak on the marae, despite leading the party within Parliament.

It never ceases to amaze me what women of other ethnicities put up with from their men around the world as protocol or as part of their culture.

This was an orchestrated attack on National to promote Shane Reti and humiliate Judith Collins.  Marama Davidson was in on the fix.

I would not be surprised if Reti was in on it too. 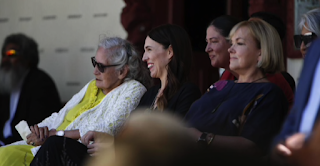 And during his response, Waihoroi Shortland said it was a shame women had not been given the opportunity to speak. "Next year you will get that opportunity."

It got a thumbs-up from Judith Collins.

She should have raised the middle finger and walked out. If Ardern got to speak so should Collins.

It is little wonder National are polling so badly.

They do not know who they are.

Maori have apparently agreed to let women speak next year. Of course they reserve the right to mess with that in the next 364 days and there’s no certainty it will be an issue for National by then anyway.

PS: And out comes the Trump card.....cute little Neve with her glasses on.

You cannot outstage a cute infant in glasses......ever. Let alone one with the makings of a good Gisborne mullet. 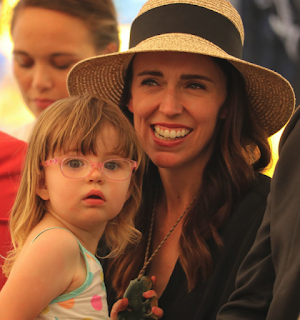