Simon Wilson Was Never Magnificent Even Once; Why Does He Still Have a Column?

You would think that having ass cancer would make Simon Wilson a more humble, pleasant individual, grateful for the woke turn of the world. We know he has had ass cancer as he bored us all witless writing about his plight.

Simon Wilson, who sounds like he only visits nice restaurants when he can expense claim them for his boring pithy reviews, has had a backhanded slap at Tony Astle.  Big error.  Everyone who knows Tony even on a superficial local level, knows really why he has closed up. It has zero to do with Covid, zero to do with failure.  These last few years he was busier than he was the pre 87 crash. Auckland was humming and continued to thanks to Robbo injecting $50b in funny money into the economy.

In a piece peppered with enough compliments to avoid being edited for being snarky, Wilson fails to recognise there are people out there who can read through his cringing ballocks.

He'd been magnificent, once. Why bother trying to be anything else? So the cooking stayed great and the wallpaper got shabbier and the customers drifted away.

They did not drift away at all.

And if that was the case it was one more time than Wilson has ever been magnificent at anything.  The problem is Astle over 47 years (more than I have been alive)  has been magnificent more than once and re-invented his clientele over and over again.  He had the grandchildren of his original customers come in.  He was a visionary to appeal to the Chinese market when Aucklanders like Wilson were still blaming the Chinese for rising property prices - long after they had actually got out of the market and selling the property to fools his age. 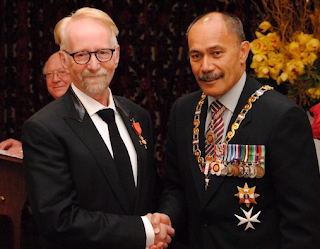 You didn't go to Antoine's to try a new asian fusion menu item.  You went to enjoy the old stuff.  He even got me to briefly enjoy tripe. It was a very brief flirtation. When you made your reservation Astle had already gone to market and bought your food.  He knew what you would be eating and that is why the one man band survived so many years.  When he wanted a holiday, he would close the restaurant rather than leave it to someone else to run.  Yes you paid for your meal, but he was there in the tiny kitchen cooking it.  Every damn night. For 47 years.

That alone is extraordinary. Matched probably in New Zealand only by the farmers supplying his meat, every day working for 47 years.

Simon Wilson is the sort of person restaurant owners should ban.  He is a bitch and an unfunny one at that.  This is a hard thing for a straight male to be.  A bitch.  His writing of restaurants is bitchy and in terms of reviewing one, he appeals to persons too tight to actually wish to go fine dining.  Every sentence in that piece that dares to be what fine dining should be, Wilson sticks up his nose at it.

He is not AA Gill.  He never will be.  It is a reality that has haunted Wilson in his life.

There are members of AA who could write better reviews of restaurants.

Wilson should be reviewing those restaurants that used to have coupons in the $50 white book that was sold around Auckland. The Entertainment Book is it?  Wilson really should limit himself to reviewing restaurants that offer Groupon vouchers in the modern era.

The fact that Antoine's actually closed two weeks ago, quietly, without fanfare and its owner and chef simply paid his bills (rare), shut the door, posted on his website and fucked off to live the rest of his life, says absolutely everything you need to know about the real Tony Astle and everything about Simon Wilson.

The really nice things Tony Astle has done in his life for people he has done without fanfare and publicity. 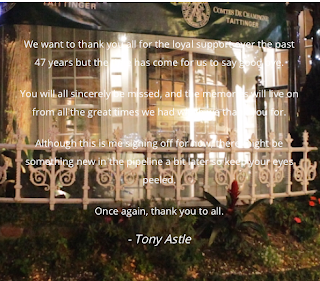 A doyen of the Auckland dining set would have known his restaurant had closed. Two weeks ago.

He would have worked out why.

And never hit send on this absolutely appalling piece of salty trash.