Good grief.  The word-soup in this one is unbelievable to comprehend when English is your first language, let alone as the Chinese where it is not.  The muddling of metaphors is horrific and not some sort of genius so clever that you have to say it is, else look foolish.

It is not clever, it is incomprehensible garbage and batshit crazy.  Someone needs to tell the Empress quick smart that she is wearing no clothes.  This whole world that she and other self styled elite Maori live in as alleged "orators", reminds me of children with their own club rules speaking in gibberish on their play-fort.  It is not real, beautiful or that important to adults.  It is just petty, annoying and embarrassing when those up the tree are not children.

Also, the whole thing is not even original to Mahuta.  Manying Ip wrote a book on it in 2009. 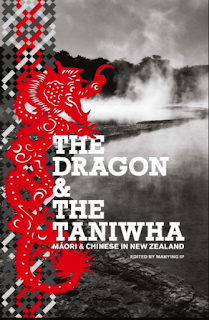 The media have not even managed a simple google of the words before gushing over it and falling at the feet of Mahuta in an attempt to line up their trade-troughing trips once the world opens up.  When you praise copying the intellectual property of the Chinese, there is a new perspective on irony...

As well as spelling out what the Treaty of Waitangi means for foreign affairs, a new metaphor adopted by Mahuta on Monday morning dug into creatures of Chinese and Maori mythology

“When I think about this relationship ... I liken it to the respect a Taniwha would have for a Dragon and vice versa,” she said

“Taniwha are protectors or guardians, often of water, and hold dominion over rivers, seas, lands and territories. Deeply steeped in culture, they are spiritual and one with nature. They symbolise a sense of guardianship for our people and our land and a strong belief in self.

“And like the Dragon, they are powerful, auspicious, and embedded in our epistemology. They have many forms, and are a symbol of leadership, prestige and strength, and are to be revered.

“We are two peoples – with characteristics and symbolism unique to our respective countries.”

I interpret is as if the Dragon opens the chequebook the Taniwha falls into line.  We all know what happens in New Zealand when the Taniwha shows up at your door.

I also read that Mahuta is not talking specifically about New Zealand's relationship with China in those words.

She is talking about Maori business with China.

The Treaty is actually signed between "two peoples".  Adding China creates three.  Modern activist Maori never view New Zealand in terms as "one people", it is always "our people", and "our" does not include anyone not defined as Maori.

The Chinese will pick this up and wonder just what is going on, if they really care as New Zealand is a blip on their path to world domination. This is a speech in Mahuta's capacity as Minister of Foreign Affairs and Trade and as a Senior Cabinet Minister of New Zealand. It is not in her capacity as a Maori as a Princess of Tainui.

Aotearoa is not the official name for New Zealand, despite what a woke minority wish it to be.  Say the word overseas and no one has a clue what you are talking about.  Mahuta says:

"Taniwha are endemic to Aotearoa".

Winston Peters has previously derided any moves to rename New Zealand with these wise words:

Mahuta then branched into applying the Treaty of Waitangi to trade relationships.

As set out in my inaugural speech at Waitangi this year, I believe our foreign policy settings can be enhanced by te Tiriti.

Right, but te Tiriti has two parties and has absolutely nothing to do with China .... if the Crown suggests unilaterally that te Tiriti is to be applied outside the borders of New Zealand with another race of person, Maori would raise merry hell.

Mahuta also has treaded on dangerous territory given that Mainland Chinese view that Hong Kong and Taiwan are included as "one country two systems", when many University Maori consider New Zealand itself should have two systems, lending into one of their own for all as outlined in He Puapua.   China isn’t exactly showing a huge regard currently for upholding their own Te Tiriti style arrangements for others and simply wouldn’t tolerate the current behaviour in New Zealand of activist Maori if they were governing.

Here is the full speech for your reading pleasure.

A speech that Winston Peters has too much self-respect and respect for the office as Minister of Foreign Affairs and Trade itself, to ever have made.