Getting Your "Big Girls" Pants On 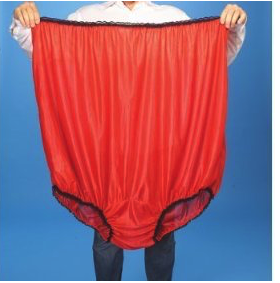 Poor Kiri Allan has been having a hard time of it lately battling cancer. In politicising this with her friends linking her story to health access and race issues, she then copped some abuse directed at her online by mainly men who should behave better even if they feel provoked.  Allan posted some of those comments, to prove presumably what we already know - people when online make rude comments.

However somehow Newshub managed to draw in other groups into a piece of clickbait for our viewing pleasure.  Of course all about race, because that is what their clickbait peddles.  What followed I have trouble believing:

Selah Hart, chief executive of Auckland-based Māori public health group Hāpai Te Hauora, told The Hui on Monday the poor treatment Māori women receive makes it less likely they'll go back, even if it's for something critical. Even little things like names being pronounced incorrectly can erode trust in the health system.

"When you take a step back and you understand the concepts of whakawhanaungatanga, of understanding how to say your name properly... I've had to personally experience having my name torn apart for 30-something odd years."

I wonder how badly people want me to care about the state of their health when they do not seem to care much about their own.
Wrapping emotive comment around very broad Maori "concepts" that are explanations of things not actually unique to Maori, is the way of selling such to make it non-debatable by non-Maori.  I venture into such areas.  Areas that always change in the name of understanding this end game of Te Ao, which leads the foolish on a Dorothy style expedition on a Yellow Brick Road to find this Te Ao. Te Ao is never meant to be understandable to any non-Maori questioning the proverbial being taken out of us every time these extremist activists communicate.
If Maori seriously are not turning up to medical appointments because a receptionist calls out their name not to their liking, you have to just wonder......how much do they care about themselves?

I am just a little older than Selah, and treatment of my name in New Zealand is bad enough for me.  Try spending 20 years in countries not necessarily where English is their first language, navigate my first name, spelling the first letter, let alone my surname.  Explaining every bloody time.  Calling it out over the phone in phonetic alphabetic to call centre operators.  Wishing you were just called Jane Smith.  Oh my "whakawhanaungatanga" by then has been so wounded the w's have gone to loud f's.

You cope with such disappointments in life. You go put your big red socialist girl pants on. And harden the f*** up.

Because absolutely no one else in the universe should care more about your own health.

How about Maori just turn up for the predominantly free services they are receiving and worry more about their own health right now than the perceived distress and suffering of a document etched a couple of hundred years ago between two sets of less evolved groups of people who both migrated to a country?

On time as well.

And forget Maori for a second, has Selah ever tried to get a white middle-class professional man over 50 years old to go to the damn doctor?

Try dealing with that.  I can tell you - almost impossible.  Without plenty of treats.

Forget about the vaccines ,"appointment hesitancy" is not special to Maori.