So WHO Do All The Women Listen To Now?

The WHO (World Health Organisation) are a bunch of numpties.  Seriously politically active corrupted numpties and are neither professionals nor are they experts.  They only "follow the science" when it is convenient for them.

Their response to Covid has been laughable, confused and frankly totally criminal.  Yet mainly women in New Zealand, have curiously fallen under the spell of WHO and their foot soldiers like Siouxsie Wiles and Ashley Bloomfield. Two of the least likely people you would ever accuse of lighting up the nightlife.

So if you listen religiously to WHO about Covid then I am afraid you are going to have to take this seriously as well. Surely? 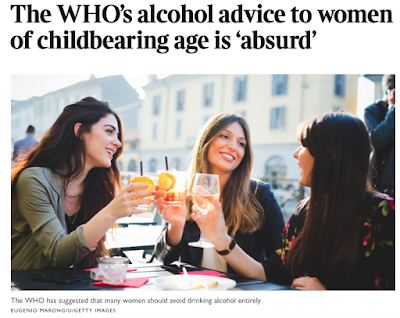 I personally think it is a fantastic idea.  Like everyone of you in favour of locking down New Zealand forever, because it entirely suits me.

If young women wanting to have children were all banned from drinking champagne for example there would be an absolute glut of it, forcing prices down for those of us older and capable of carrying our own Champagne Passport.

I would totally be up for the breach of my privacy on that one if it meant cheaper fizz as a result of banning the competition entirely from the market for it.

Women who are of child bearing age should also be banned from eating lobster and oysters as well. WHO should propose that as the next step for optimal child bearing health.  Perhaps chuck in truffle bone marrow as well as my favourite Dark Kit Kats. Demand down, gluts, price down.

I would then go further and invite a WHO proposal banning men 50+ from eating all forms of luxury cuts of beef and driving supercars.  Jacinda is already attacking their utes so they can keep their boats I guess because we must be kind and i have terrible sealegs.

All of this for their own safety and that of others.