Ardern Seems To Have Already Given Up And Cancelled Summer

No overseas guests then for the PM's wedding.......yes I jest.

At his weekly press conference updating progress on the vaccination roll out today, Hipkins essentially slapped another padlock on the border gate, warning people requirements for isolation will stay the same at least until the end of the year and likely beyond that.

"I'm still working on the basis that certainly for this year people will be in MIQ for 14 days probably into early next year as well but we haven't made any firm decisions about that," Hipkins said.

That means double vaccinated people returning to New Zealand will still need to snare a spot in MIQ and stay there the full 14 days.

Oh dear. We haven't made any firm decisions? Yeah RIGHT.  The vaccine rollout is going at a more pedestrian rate than Slomo's across the ditch. The difference is $55m paid to New Zealand media to not talk about it.

This means none of you will be leaving New Zealand either as you cannot get back.

New Zealand effectively has an Australian style ban on its citizens leaving the country.

Usually very positive realist Des Gorman has hit the nail on the head - no reward to be fully vaccinated.  Offshore or in New Zealand.  He is now talking about Astrazenecca not being a recognised vaccine! Unbelievable.  What others to add to the list?

There is no way the lockdown lunatics will agree any other country is low risk anyway.  Can you imagine it?  Once Dr Doomfield drones on and the Pink Wiggle publishes another article of excitable gloomiest nonsense online and Michael Baker is rolled out reminding us that we could still all die.,,,some day of course...... as Shaun Hendy produces more modelling that wouldn't make the Lego sale bin.......impossible.

I wondered what New Zealanders could actually look forward to this summer - last summer was the Americas Cup at the expense of $300 million.  At least there was something stopping you all going absolutely nananas over summer.

This year chances are you will be vaxxed up there or there-abouts waiting for Labour to focus group for the millionth time all the Keyboard hypochondriac mothers of "immune compromised" molly coddled brats out there.  Afraid of the non-existent Pakistani, Bangladeshi and North Korean variants requiring a third Pfizer for.  When would the warrior Mamas of wokesville like their children to be exposed once again to the life-threatening dangers of stepping in a puddle or accidentally eating gluten? 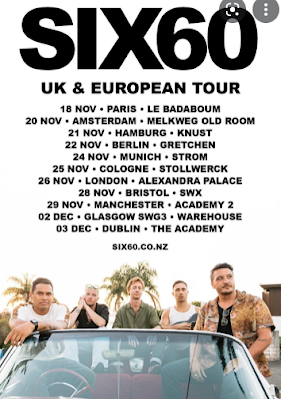 Well no. Even Six 60 are not sticking around!  They are in Europe until at least early December.

How are they going to get back to New Zealand for the summer festival series?

Lorde? Well she is touring New Zealand. I hope she doesn't decide to leave and wish to come back at any point between now and then.

Rod Stewart? Well he is scheduled for April 2022 at The Mission. Good luck having him sit for 14 days in the Jet Park Manukau.

Australian acts? Well the transtasman bubble is going so badly now that it is unlikely that acts can afford to get caught in the lunatic lockdown wars when outbreaks occur. The States of Australia are bad enough, they thought they were bad enough........ but they then met Ardern and Dr Doomfield with the shouty Pink Wiggle.

Well Auckland will have no cruise ship tourists, no Americas Cup, no ASB Classic tennis, a trans tasman bubble at the whim of by then no doubt even more uncertainty, no real stunners in the cricket department this summer and the financial disaster that will be hosting the womens world cup in March and April.

Bars and restaurants as a result will be struggling, landlords wishing to hawk out their apartments on Air BnB will be taking a towelling unable to pay body corporate fees with rents this year let alone ground leases and retail? Well forget about that.

At least surely Auckland can complete the construction site that has become their city while there is absolutely nothing on and get rid of the traffic cones?