I have previously made a case for Covid vaccination to be compulsory for Maori and Pacific Islanders.

This despite both groups being under-represented in Covid cases to date.  So I had a look at the latest vaccination statistics by ethnicity, a little bit more hidden they are now on the Health Ministry website.

Here are the priority groups in New Zealand's vaccine rollout.

If you are Maori or Pacific Islander and do not qualify under these priority Group 1 or even 2, then you seriously lack imagination to find a qualifying class to demand a vaccine early from your local provider!

The Ministry of Health doesn't seem to be keeping the right data.

Dr Ashley Bloomfield says the ministry is now going to the DHBs to try to get more specific patient data so they can understand the total size of each priority group.

The usual excuses have been rolled out however let the media report the facts as we were told how vulnerable these groups were to death and destruction.

The big talking and no acting continued.
Maori and Pacific Islanders are the two "vulnerable" groups the country spent tens of billions of dollars locking down and protecting as left wing politicians and activists were quick to remind us that Maori died back in 1918. That they now will not take the jab as minority Asians are doing in their numbers, is an insult to every New Zealander who has had their lives disrupted since March 2020 accordingly in often tragic ways.

Cough. Where have they done this?
Tens of millions of dollars have been thrown at Maori for the vaccination rollout and the comms.  Where are the KPI's to date?  The accountability?  Is anyone getting up them or are they just handing out more money?
All this talk chucking a bit of Te Reo in the media to sound impressive and the numbers do not lie.  Maori especially have more access to vaccines than anyone and their statistics are still woeful.

Over $40 million had been allocated for communities facing significant barriers in their rollout, including $24.5m for community-based vaccine support services to support Māori health providers, and 40,000 courses of the vaccine as a starting point.

Maori are being hired as consultants to this comms and advertising effort.  Other Maori presumably not on the ticket, are finding it offensive and being offended.
It is a shit shambles of infighting and gamesmanship and no accountability of KPI's.

A spokeswoman for the Department of Prime Minister and Cabinet Covid-19 group said the ad was developed with “input from several Māori communications experts”.

They then did what they always do on the Ninth Floor and chucked even more money into it.

In response to these concerns, the Ministry of Health recently committed $3m to a Māori Covid-19 vaccination communications fund to create more iwi-centric communications.

Do Maori and Pacific Islanders still not understand how important and where to get a vaccine from?
Or is it as I predict it to be, that neither group are stupid and they just do not want to be vaccinated?
They clearly do not fear death from Covid anywhere near the way the left wing politicians have used them to keep borders shut. Now they are taking the piss by ignoring calls to get vaccinated.

Ardern said 98 port workers who had dealt with the Rio De La Plata had been tested but only nine of the workers were fully vaccinated.
She pointed out that it was now mandatory for those workers to be vaccinated by the end of September "or it may mean job loss".

Stop farfing around and call them out, we know who these people are and where they are from and who they are influenced by.  They were meant to be vaccinated months ago.  Vaccines are available.

Same when this happened.  What were the ethnicities of persons who turned up to this? It was an event target specifically at South Auckland and Maori and Pacific Islanders. Hmmm...... 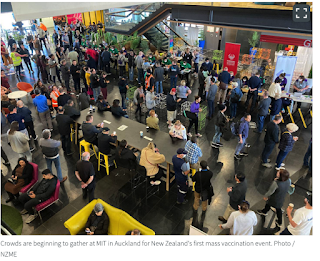 More Maori than ever sit in Cabinet, how about they get off their large backsides, provide some leadership and find out what it is?  And fix it.
Because if this vaccine "stroll out" among Maori and Pacific Islanders is the reason the borders stay shut and lockdowns happen, I can tell you right now there is nothing that will split the country even more than He Puapua after the billions that have been spent and the comms hundreds of millions to chosen MCM (middle class Maori) consultants -
To help people who do not wanna help themselves.