On one hand it rolls from the scribble face village idiot: 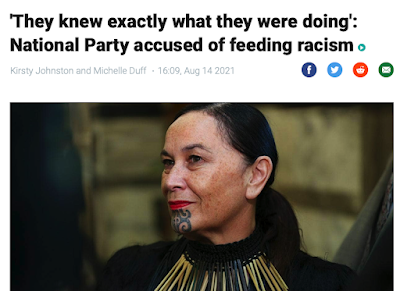 But the author of He Puapua, part Pakeha Claire Charters who I am afraid has at least 100 more IQ points than Debbie "Kerry" Packer will ever have, says the following:

Claire has actually asked for a debate!
Labour needs to in her words and I agree completely:
1. Explain its position
2. Salvage the situation
3. Start an educated and mature discussion.
Still waiting bros and sisters from L for Labour.
We know they want Charters to roll this out as she is the ONLY part Maori who could oh so eloquently explain the absolute BS that is He Puapua, but I so desperately want a Labour MP, any of them,  to put themselves up for this debate v Crusher, myself or actually anyone in the National Party.
Anyone
No-one,
Have a look at that committee that just said  yes to Charters, not a brain between them
Yup.
NOPE.
Charters may be capable of a decent debate but off the bench it looks weaker than TJ Perenara when his wife tells him he has to stay home.  No one on her committee is capable of arguing for the measures she wrote up for them.
In a way it is genius by Charters.
Labour have never needed an extra member of Cabinet above the morons than now.  Bloomfield is making a decent run.
In terms of competence and intellect I would elevate Charters to anything above Kelvin Davis and apparently he is #3. Oh Dear.
Meanwhile Packer is playing Debbie dumb dumb in her own little world in the kiddies sandpit.