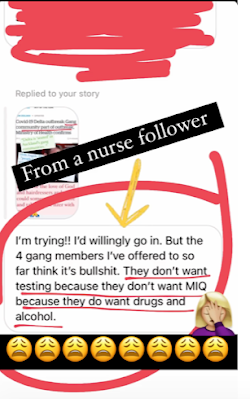 So the truth is finally getting out there.
The gangs value their rights and freedoms more than the rest of us and are refusing to be tested because if positive they get sent to MIQ and it is stricter there than in jail.
Before screaming at them let us try and understand their logic.

Labour has more Maori and Pacific Island MP's and Ministers than ever.  Months of cuddling up to gangs and playing nice is not helping them here.
Gangs at least can get drugs and alcohol in jail and do whatever they want in the hierarchy in there.
They do not seem too afraid to end up there.
The risk and inconvenience to gang members of getting tested and positive and ending up in MIQ is higher than the risk of getting caught in New Zealand and convicted of a crime and being sent to jail!
Let that sink in next time you think MIQ is easy.
Well done Jacinda Ardern, you reap what you sow still chasing with high vaccine rates, the fiction of Covid zero.  Perhaps she is the "great unifier" after all.
She has done the impossible and united gangs and the underclass, with upper middle class folk who do not wish to MIQ when entering the country. All these groups  are now finally asking WHY, rather than blindly complying. Especially the poor and disenfranchised.
I for one do not blame them.
I do not blame anyone in the South Auckland community and/or gangs for hiding from Covid testers.  Or the people of Clover Park who have gloriously ignored calls to be tested.

Be very afraid when polar opposites in politics and lifestyles, are actually brought together by acts of civil disobedience and questioning of authority.
My advice to the gangs (not that they need it) is do not get tested unless you legally have to.  And you seem to not to have to.
Why would anyone subject themselves to the chances of a positive result given how you are then treated?
Get a positive and they'll detain you regardless of symptoms.  Your family is inconvenienced, you cannot work, you cannot do cash jobs.
This treatment is utterly outrageous and right now you would be stark raving mad to put your hand up in New Zealand to get tested for Covid without any symptoms.  Everyone who cares about their health especially the older and newfound hypochondriacs have already had ample chance to be vaccinated.
BUT if you think that’s overkill:
Try coming from overseas and being of any race or patch.  175,147 people have since 26  March 2020.  Just 1851 were tested positive imported cases at the border.  Or 1%.  Many of those were at the start of Covid coming from China and India exercising their second or third passports.
Numerous entry tests, vaccinations, expensive flights that can be cancelled at the last minute AND they then make you pay for your own MIQ even when after 14 days you haven't had Covid at all!!!
The social contract has completely gone.  This is all a nonsense.
The Bill of Rights has a justified limitations section.  When breaches are made, they have to be reasonable.  Having infinite breaches with no plan or timeline for their re-instatement is not reasonable.

New Zealand now has higher vaccination rates than many countries that already have open borders.  More importantly every New Zealander who needs it should have already had at least one shot of Pfizer.  If they have not they are not that interested in it.
There is no way ignoring key sections of the Bill of Rights can continue in a "free and democratic" society.  The Act if it continues to be ignored will result in it belonging in the shredder.
Time has passed a reasonableness test.
Do not get me started on domestic vaccine passports and the dismissal of employees who have chosen not to be vaccinated..........I will save that for another day.  Unions are deafeningly silent with how workers are being treated.  They would not have been if National were the current government.