This is single handedly the most courageous thing John Key has ever signed his name to, dating back to the start of his Prime Minister years.  Sigh.  If only he was this transformational as PM....

That Key has decided to show some nuts and get this angry, is something for such a moderate.

I always considered Key from my right of politics, as a necessary pathetic populist wet. This is however the very sort of leadership we all need right now.

Especially those in a demeaning lottery waiting being told the Bill of Rights does not exist anymore as we await to win a golden ticket to get home.

Fran O’Sullivan responded today to something with this excellent comment somewhere into the air. 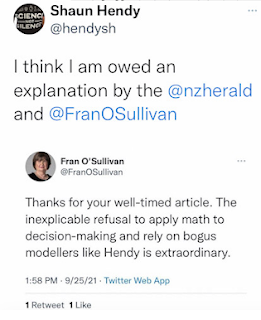 I #standwithfran. I agree with her comment.  There was nothing wrong with it. It doesn’t matter how you spin it she’s called Hendy a bogus modeller. Fellow modeller Rodney Jones did that last week.

The poor old dear is well over 65 by now and clearly can’t use a computer properly. That’s her only crime.  It was a private message sent to the wrong space in a woopsy.

I’m sure it wasn’t meant for public consumption. However neither were mine and others private messages to her all those years ago that she crafted for release to save her own ass that was donkey deep in it, so I’ll take the chance to re-publish the transaction as I have it grabbed here.

But only to stand up and support her 💯. Go Fran.

Shaun Hendy has taken umbrage and with his cabal of anointed “experts” BULLIED one of the largest bullies at the NZME in Fran.

This is not right.  Bullying the elderly. 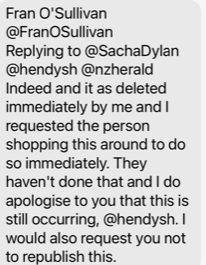 I’ll let you all decide what really happened here.  Look up the threads. 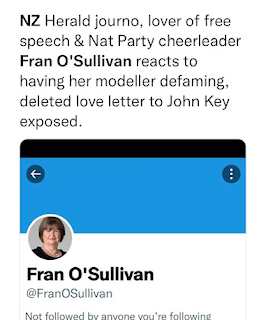 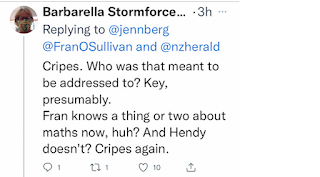 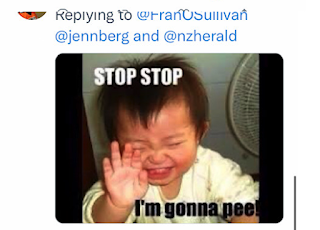 Scientists and modellers now dancing with the Ninth Floor propaganda machine are BULLYING senior New Zealand media from having free speech on a casual Sunday.

This should frighten you all.

These prats are posting their political activism for all to see. 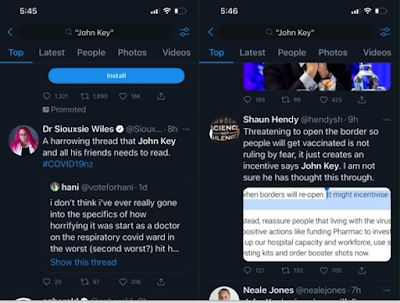 These people (not Fran O, we can only wish to have people of her common sense in charge) are deciding at a basic level whether you should leave your house.  This should always be up for debate in a free and civilised democracy.

I posted on that absurdity previously and profiled all these snake oil salesmen and women. You can search for that post and you won’t find it. It was “disappeared”.  Yes, mysterious isn't it?

They’re deciding if your kids can come home for Christmas from false imprisonment for 14 days once they gain a golden ticket through a lottery when the Bill of Rights passed by a Labour regime no longer applies.

When someone gets to decide whether you can leave your house in the morning…..

They deserve FULL scrutiny, as any public figures would with such power. Media SHOULD be questioning them. They’re up for public scrutiny and ridicule.

It is a disgrace the media feel bullied into abject cowardice for this.

I will not be. Neither should they.

Hendy has turned out to be a cross between a weather forecaster and the mad old lady reading your palm at Victoria Park Market. His predictions are ridiculous.

Heather du Plessis-Allan, bless, also from Fran’s NZME has been doing gods work quietly and respectfully questioning him for weeks on her show. We have been laughing at Hendy for months.

“Not plausible” yep bogus. Other expert modellers have said it. She’s had them on the show disagreeing with his calculations. Hendy’s predictions have just not come true.

Fran O’Sullivan used to stand by her words. In times like this we need people to courageously stand up who can and question the power of the State.

Why the backdown?  Who has bullied her to back down like this?

I will support her.

We all should.  More than anyone I would absolutely love to see her shitcanned for her previous lack of journalistic integrity and crapping on  her sources for her own means, however no, not over this.

NZME should as well.  They need to do this tomorrow.

Back her or sack her.  What is it going to be?

I should advise from every legal and public optic, they all need to actually back her.

Tomorrow at NZME and give her a high five when she turns up in the office. Oh sorry that doesn't happen as Auckland is still at level 3.

And Heather, who is doing a great job questioning these Lockdown lunatics from 4-7pm daily.

There are some New Zealanders you do not wish to prevent from going to Hawaii this Christmas, and there are some who will return and never forget the 14 days of false imprisonment for no reason whatsoever if their pox test is negative....

Indeed it has. Bring the war on.
Await the weaponising back from the team of a million offshore and those in New Zealand right now who need to leave and return.