The headline at one time was the following. 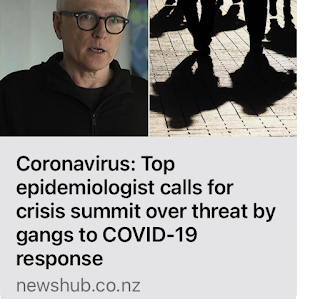 The word "GANG" has also been replaced in the story of the version I read, with the complete euphemism of real mis-information called "marginalised groups".
Who ordered these changes? And why? Were any political staffers involved?
Gangs are NOT marginalised groups, well if they are marginalised it is because they bloody deserve to be. They also do not want to be part of society. They’re proud of their rebellion. The author of the original headlines and text summed it up perfectly.

A leading epidemiologist is calling for a 'rapid review' of our COVID-19 tactics, saying we need to focus on the remaining lines of transmission among marginalised groups.

And that's within "marginalised groups".

"We need to work with marginalised groups where we are pretty certain the virus is continuing to transmit and if it's associated, for example, with drug distribution, then I think that means working with Police and Corrections to promote a harm-reduction approach and that's saying look, we are going to be less concerned with your criminal behaviours, we are going to be very concerned with the extent to which you might be sharing the virus around."

Oh right, so Covid with ludicrously high vaccine rates is now such a danger that it is more harmful than drugs and drug dealing?  Brilliant.

The irony is that gangs may indeed save Auckland from more level 3 and 2 by making Covid zero an impossibility. The original articles also quoted Baker as saying if GANGS do not start playing by the rules then Auckland will be in lockdown to Christmas!  Politically that would be absolute dynamite.

Kate Hawkesby screenshotted it before it was altered. 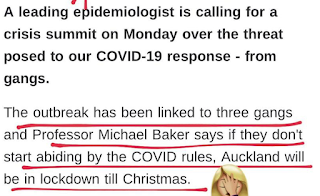 This was replaced with:

More from the pulpit of mistruth and misinformation to now cover his words up. Have a look at the editing that has gone on this afternoon.  They have censored Baker's original claims. Pravdaesque. 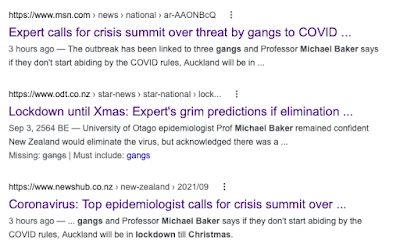 They can argue they do not wish to demonise GANGS all they like but there is only one person Aucklanders will hold responsible for this Covid Zero obsession and that is Jacinda Ardern.
She wants it for her ego, her OCD and most importantly to be able to brag like the Kindergarten teacher she is that she beat Covid regardless of how many billions have been wasted in extra weeks level 4 and 3 that you are being subjected to.  All of which is a completely lost cause as Covid will never be “beaten”.
These articles were edited not because gangs were at risk of having their feelings hurt, but to save the Princess from the public turning on her for once again doing nothing about the behaviour of gangs.
Behaviour now she is punishing everyone in Auckland for.