Wow - the paid for NZ media have really earned their $55m of spruiking for Labour today!!

Here are the normal numbers per day of vaccinations in the last bit.  Data from the MOH website.

The data is a few days behind but I suspect the numbers fell away as people held out for the free food and prizes today or in a PR whoring move, brought forward their vaccines. Surprise who chose to do that. 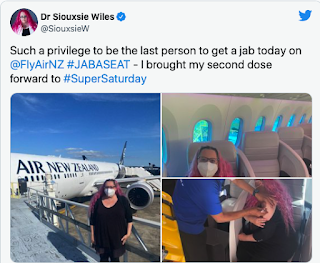 Let’s see what the averages end up being this and last week once smoothing of these bribes is performed.

All this effort to get 40,000 people to line up.  The second dose people were returning anyway.

So after all the effort put into this event, the numbers of 130,000 total are not that much more impressive than daily results of the previous highest period of total vaccination of 93,000.

At least we have found out today why Jacinda Ardern fails to set any vaccination targets to get out of this mess.
1. When she does they are ridiculous, (too high such as the ridiculous overall vaccination % or too low, 100k for the vaxathon) and;
2. When the low target is achieved like Mummy in the car when the kids say "are we there yet"?, she simply lies and says "just a bit more".  She wanted 150,000 then.
They have learned from Kiwibuild at least!

But do not let the statistics stop Labour from declaring the whole event was a raging success.  Ardern set a target of 100,000 jabs that is only a few thousand more than the best days previous!!

The truth of the actual success of today is in the pudding on Monday.

If this event was so successful then Auckland should be out of its retail and hospo hell and a date set for re-opening within a week for both.  The South Island should be at level 1 and the rest of the country very close to being out of 2.

If you are not vaccinated with at least a first dose after today it is because YOU DO NOT WANT IT.

Let the country move on.

Auckland? Well Ardern did not even visit the largest city in the country today.  She is hiding from it.  Forgetting it is there. Auckland just has to wait until the most "vulnerable" are fully vaccinated.  Then what?  More "For Lease" signs up and shop fitouts being ripped out to save people who don’t even show up to a Vaxathon?

Auckland is fast becoming the scene of some sort of sick social experiment to see how far you can push people who are vaccinated before they find people or classes of persons who are not and abuse them or hold them down themselves and stick needles in them.

The Prime Minister now thinks she can hold the entire city back from normal life, to fluff her own ego yet again and win a non-competition for the world record for the most vaccinated country.  I kid you not, this was today's make-it-as-you-go target!

I have seen some cynical behaviour in my time following politics but the events of today really were Covid theatre at its most cynical manipulative worst.

I await Monday for the "traffic light" system.  Yet another distraction to set yet more targets that will then be moved again and again.

The red light - green light comparison memes are already out there.  Apart from the disaffected making these decisions still on full pay and the public sector who still get paid.

New Zealand is about to get yet another squid games red light.

Do not move, do not complain.  Or you shall be proverbially shot.