I will save myself some time and cut paste the template from my post titled "Vaxathon Week Produced Worse Results Than The Previous Week!"

Marked up now in red.

Do not say I did not warn you.  This is what happened focusing your week on a Vaxathon day.

Not even the worst cynic in me thought the numbers would actually keep going backwards!

Mainstream media bought and paid for are SILENT on this today.

I have added a totals column so you can compare.

Compared to vaxxathon week the numbers have got even worse, slowing to an almost standstill. First doses have fallen 43% on the week before.  Second doses 48%.

The raw numbers are found here.

Despite all the self-congratulations and the empty praise of the efforts so far, this is appalling.

Something is desperately wrong here that numbers of vaccinations despite all the promotion and hoopla are actually slowing down.

Jacinda Ardern on Friday needs to do one thing and it's something she does not even seem to be able to do in her private life.

She should not be going to Europe until she:

SETS A BLOODY DATE TO OPEN UP THE JOINT.

There is still not enough urgency if vaccination numbers have gone backward compared to the previous week despite the vaxathon.  And gone backwards again almost 50%

National have - they picked 1 December.  It needs to be sooner than that.  To have some protection with a vaccine you do not need to have both shots.

Ardern ran a political campaign for Labour and told everyone to join in the vaxxathon that was the 16th October.  Other MP's from other parties were excluded from the show.  On Friday she must make the date 6th November at the latest which is the date these people should be lining up for dose 2.

It will be interesting to see on 6th November how many of these knuckle draggers who waited so long for their first vaccination shot, will actually come back without the treats, pies and lollies, for the second shot.

If they do not all come back (all 39,654 of them) then we must GIVE UP IMMEDIATELY ON THEM.

New Zealanders are just not getting the urgency of the task at hand as the leadership is not making actual performance a priority.

Groundswell II looks set to be a cracker.

It is not just a protest now for the farmers, it should be a protest for everyone to demand their rights are returned and not held hostage by people who will not get vaccinated.

Jacinda Ardern is cruelly chucking up the unvaccinated as human shields for our anger at those rights being taken now for no valid health reasons but ones that are purely political.

It is time such anger is directed where it belongs - solely at her. 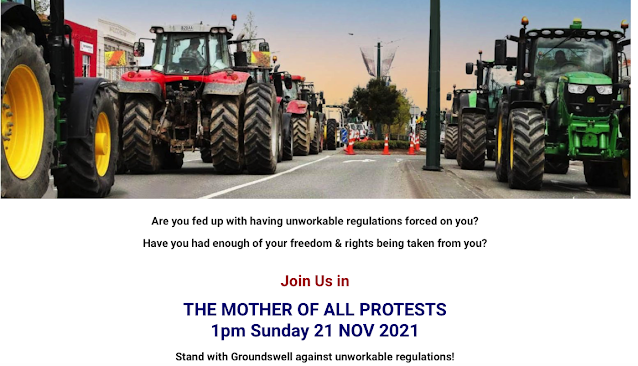