Then follows yet another very confusing, wordy, weak and woke negotiation with the domestic terrorists that are currently keeping an MIQ system and now, Auckland in Level 3.

Useless.  As usual his plan is too hard for bureaucrats to follow or anyone to sell.

As Nick Mowbray and co have found out.  Helping or offering to help this government of morons, idiots and domestic terrorists.  Does not pay.   New Zealand is now worse off than it was.  It has record cases, its major city is stuck in level 3 lockdown and there is an exponential rate of  lack of compliance because people of all races and types  have had enough.  There is also tens upon tens of billions of debt now and spiralling inflation with it.

And now the idiot-in-chief wants traffic lights.  When Aucklanders run those even in pre-Covid times. What is next, orange cones?

There are currently TWO things stopping New Zealanders from coming in and out of the country AND Auckland from returning to business as usual. 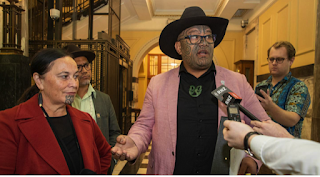 Today we had a shallow piece of Covid theatre where these morons staged a faux fight.  The Maori Labour caucus with a piss weak PM vs the far left Maori Party who hate everyone white in New Zealand let alone ones with business or wealth.  No, rampant  inequality is a preserve now for Maori elite within Maoridom and not anyone else.

Come on?  Again I have seen enough politics to know what is going on here.  It is cynical and dirty.

Maori are doing a classic brownmail move to get more cash.  These chaps and chapesses are ALL in collusion to game cash from a weak Labour leader.

Young Maori for whatever reason do not wish to be vaccinated.  I am picking they just can't be bothered.

They are the ones most likely to get Covid-19 and be fine.

Jacinda Ardern has said that New Zealanders cannot move levels without every demographic reaching her silly targets that she has not announced but apparently we will hear about....maybe...on Friday.

She has not been seen in Auckland despite being able to travel there, since when?

We are not talking Asians here and Pacific Islanders who are avoiding the needle.  Both communities have come to the party and got vaccinated.  Why do the poorest most downtrodden Pacific Islanders get what is happening, and not Maori?

Well.........Maori have a leadership that WANTS to keep you all locked down.  That is what.

Right now Maori across political lines are giving you all a taste of He Puapua to come.  Remember this.  This is Maori holding the country to ransom stage 1 (although I would argue its about stage 99 of 100).

Sir Ian Taylor is Maori, we know that as the last white person who put him in his place was cancelled. Well we know Taylor is a successful businessman.  I am sure to achieve that status he has NEVER backed down from serfs pushing him around.  So why, like other businesspeople worth millions, hundreds or even billions, is he letting politicians?

I do not think Taylor is sucking up to political Maori, I just conclude like most businesspeople he is politically very naive as he doesn't have any idea what politics is going on here.  If he did and wanted a result he would do this if he was any sort of community leader:

1. Get on Zoom with the Maori Caucus and the Maori Party caucus of two. Put forward your argument. Tell them what is happening in business and the community as you see it.

2. Tell them in no uncertain terms that middle New Zealand has worked out that low(er) Maori vaccination rates and their demand to keep borders shut IS the only problem remaining and right wing bloggers and political parties (and extreme right wing hate groups) are shortly going to have a complete rollicking time feasting on the carcass of Maori political reputation.

3. If Maori cannot be trusted to act reasonably to re-open the country to Covid-19 when vaccines are available to Maori and have been for MONTHS, then what chance do the rest of New Zealand have with the power grab that is He Puapua?  This will soon come to the forefront of their minds as they sit week after long week in lockdown and restrictions for no fault of their own getting mightily pissed off.  A dream situation again for those of us who want the general population to wake up to He Puapua and get motivated against it.

I would actually like as a next step a "Maori Monday" to back up the Super Saturday.

On Monday and every Monday I would like every New Zealander who has been vaccinated, has a business awaiting to be opened on their last borrowed cash, kids at home who need to be homeschooled, who cannot see their elderly relatives, who cannot cross a border, who has to limit numbers at a wedding or a funeral, who has to sit in 14 days MIQ, who cannot go out for dinner, meet in groups ..... everyone.

To loudly remind Maori leaders that they ARE now the reason we cannot do these things.

Because that is how you negotiate with a terrorist regime.   You hit them where it hurts.

You do not pander to them - you gather your troops and turn on them.

With the baying mob.  Which is by now the “Bench” to which Taylor refers, the team of 1m offshore and most of at least Auckland.

And the piss weak leader then has to do something about it.

Covid-19 ends as NSW has proven, when a strong leader stands up and says it will end.

And Australia currently has that leader and he is NOT of the political left and he is being championed by the free media not the paid government hacks. And lockdown theatre in Victoria and Queensland is about to END.

The only question is will Western Australia open to the rest of Australia before Auckland can rejoin New Zealand?!