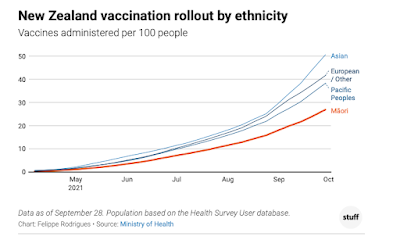 First up have a look at the mind bending classifications they go to in the bureaucracy in categorising race.  Someone spent a zillion man hours putting that waffle together.

Here are some factoid generalisations about Asians.

Many have English as a second or third language.

Many do not follow mainstream media and do not understand New Zealand slang or Te Reo.

They live across the country and are often hard to reach.

They are well versed from historical pandemics (as Maori say they are) about what happens when a pandemic rips through them, as recently as SARS and bird flu.  They die.

Many have mistrust of authority and come from military dictatorships.

Heard of Chinese and traditional medicine?  Yet they still manage to shoot up western vaccines.

Many follow the same bullshit conspiracy theories about vaccines online.

Many live in large households with poor English and a much lower understanding of New Zealand culture than Maori.

Many live off frugal incomes and face poverty until they have been in New Zealand long enough to gain resources.

They go to church and places of worship in large communities

All of the above are used as excuses for Maori, (most of mixed European race) in their modern-day poor health outcomes.  However Asian New Zealanders, (most not of any European race) suffer from almost every one of the same disadvantages.

John Tamihere has of course put the begging bowl out again. The Great Grifter he is, never waste an opportunity for grifting in a crisis.

Let us highlight the best bits.

You have to engineer and craft public population roll-out systems specific to each cohort of the population. This means Māori had to be targeted with a different approach because of their vulnerability and their inability to access a system designed not for them and, of course, not by them.

Really? Have a look at the Asian rate.  Was the "system" designed by them?  For them?

This means our mobile vaccination vehicles must know where to target populations, streets and suburbs up and down Aotearoa.

Mobile vaccinations? What about driving/ubering/getting friends to take you to the ones at Marae? I have had white middle aged men tell me of their first experience on a Marae to get the jab locally!

Our Māori workforce capacity, which is already battle-hardened in delivering mobile services, numbers upwards of 1100 kaimahi (ed- workers) across the whole of Tāmaki Makaurau, (ed- Auckland) and we want to target this workforce in the most worthy way possible.

Hang on? Mobile services - in Auckland!  We are not talking about reaching a few Maori up the back of rural East Coast here.  You are telling me Maori cannot get themselves to a clinic as they would a supermarket?

Of course JT always makes it about race.

As the majority of non-Māori population vaccinations rise, so rightly does their support for any lockdowns (ed - that is wrong should be to end any lockdown!). Our people are not vaccinated because the people who run the present system are not of us or by us. They designed a system for middle-class non-Māori New Zealanders, who have done very well.

No this is completely wrong, the group that has done the best in vaccinations is not the European, they are ASIAN. Most with zero European ancestry at all.  The graph in his very column clearly shows that before JT's rant pandering to more victimhood stuff.  JT is of course an a) upper-incomed b) highly privileged c) long-time middle class d) part Maori part Irish and Scottish man.

Asians are Mainland Chinese, Indian, Bangladeshi's, Filipinos, Vietnamese, Afghanistan's, Pakistani's.  Included in that group will be people of devout Muslim faith.  Many will be from the lowest paid end of the scale and essential workers.  They have outperformed everyone in New Zealand when it comes to vaccination rates.

The real reason Maori have lower vaccination rates compared to other ethnicities is that they simply haven't been bothered.  They take free healthcare sadly, completely for granted.

Those in charge and consultants have collectively taken all the cash to organise these Maori solutions, and sat there waiting for other people to do all the work. What more could the hapless Labour regime actually have done?!!

Health is the ultimate in personal responsibility.  How seriously people take their own health at any one time sadly is usually evident in first appearance.

No one cares about your health more than you should. Asians have got out there and hustled for vaccinations from day 1.  They have worked out where to get them, showed up and got jabbed.

They take their own health seriously and value New Zealand's free system and work out how to use it.  Generally they are a fitter population and do not value obesity.  They see the news from their families overseas and actually value getting Pfizer and are extremely grateful for it and especially to receive it for free.  Many Asian countries are only offering Chinese Sinovac which is proven not to be that good.

I bet since the day New Zealand's Pfizer stock landed or even before, the number one priority for Asian New Zealanders was to contact their doctors and others in the wider community and keep nagging them to find out how to get vaccinated.

Maori leadership have been happy to sit back behind closed borders thinking Covid-19 would never come again and if it did, the country would never re-open to protect them.

Time is up.  Covid is about to hit and there is nothing the Maori caucus and cultural twitter revolutionaries will be able to do to stop it.  Maori do not seem that concerned about following the rules currently to prevent its spread. Especially their gangs.

New Zealanders at home and abroad have done more than enough by now to protect Maori from themselves.

Time they got jabbed in the next fortnight or live with consequence.