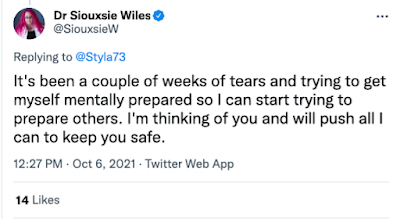 It probably sounds a bit weird, but I feel like I’ve started a process of grieving for what we are losing. The pandemic has changed our world forever, and that is going to take some getting used to. My worry is that we will see what we have seen in so many countries, and indeed in New Zealand during this outbreak – that the burden of Covid-19 will continue to fall on people and communities inequitably. We will have failed if our transition from elimination to suppression does not actively work to stop this happening.

Seriously someone take her off to get mental health help.  I am not even joking here.

We should not be guided by someone this unsound of mind incapable of making rational decisions affecting the lives of others.  This is just hysterical theatre.

Her reactions have increasingly got more desperate and weird.  Especially since filmed at the beach supporting a friend.  I hasten to add right now that friend may have just been emotionally supporting her.

People have been grieving for months now in New Zealand  - for their own freedoms, rights and jobs and businesses.  Now to even cross the borders out of Auckland. They have simply had enough.  Many in communities she feels the need to Nanny State.

This woman has successfully been a major part of having Stockholm Syndromed New Zealand now for 18 months.

Terrified a nation into being scared of a virus that kills so few people, especially now vaccination rates are so high.  She actually believes her own publicity that her and her alone can save the country, living off the praise of one leftie twitter activist and clickbait media, at a time.

She has finally succeeded in the ultimate Stockholm  Siouxsie Syndroming of herself.

Update - The comments section has inspired a new name for this as Sweden does not deserve such an insult - From herein we shall term it -  Siouxsie Syndrome.