She then talked around the real issue and gave an example with young people.  You know? Those that Covid-19 does not actually kill or even hospitalise!

I want her tomorrow to blink three times if she is currently suffering from her Maori caucus brown mailing her.

The lockdown lunatics and wannabe cultural revolutionaries, are using the poor performance of Maori and to a lesser extend Pacific Islanders, as human shields to keep the rest of New Zealand under lock and key as long as possible.

Maori in 2021 are middle class.  We need to treat them as they are and expect a lot more.

The dilution of the excuse of ethnicity for failure through inter-marriage and relationships gives fewer excuses for failure every generation.  You cannot tell me that because one parent of a child identifies as Maori because their grandparent had another relative who identified as Maori, that this makes them - incapable of getting vaccinated and therefore in need of special attention?

Contrary to what the media and twitter left want us to believe, Maori do not live in caves.  They do not live in mud huts.  They are not a Stone Age culture where people still chisel on rocks and are terminally "vulnerable" needing protection as if they’re going to suddenly go the way of the Moa!

Young Maori are well-educated. As an "indigenous race" of their own, Maori have the best of the bunch in terms of education and health standards in the world.  This is the unfortunate truth - modern Maori are not as dumb as Jacinda Ardern wants to make them out to be nor are they "vulnerable".

Getting Covid will not mean instant death to Maori as it did in the Stone Age with influenza.  A younger urban population, they're more than capable of surviving a virus that kills so few people who get it.

Maori are just choosing not to be vaccinated (their right) and/or too lazy to show up.  So what? Move on without them.  They'll soon catch up when they see what they cannot do that others can.

Either way Maori cannot be used as human shields by this Labour regime in a disgusting race-based political game, to hold up the entire New Zealand economy and with it the rights and freedoms of others to move on with their lives.

They will not. Especially as so many are vaccinated even now.  They do not live in densely populated areas.  New Zealand has precious few of those compared to the world.

Anyone questioning this of course is = a racist.  A racist who only cares about the economy.  Chris Trotter wrote an extraordinary piece that was as ridiculous if it wasn't so humorous.  You cannot even start to analyse the outburst.  Somehow it is the (lets face it more compliant Asians who have English often as a third language and the evil "system") fault of everyone else for the slow uptake.  Not that it is even slow by world standards.

Despite tens of millions of dollars separated out and handed to Maori consultants and troughers, to run campaigns to get Maori to do what we have to wait for them to do in pretty much every aspect of public good - just show up!

Added to this for all the gangs breaking the rules, others taking the mickey, the only Maori who seems to get charged publicly ironically is Brian Tamaki.  A guy who organised a protest where people turned up wanting their freedoms back and their choice not to get vaccinated, respected!

This new race based narrative to keep you behind the rest of the world, originates from the Ministry of Health own website.  They now have added all manner of analysis separating Maori and Pacific Islanders from others.  This has not existed before.

Never seen these graphs when I have looked at the site.  Why have they been added now? 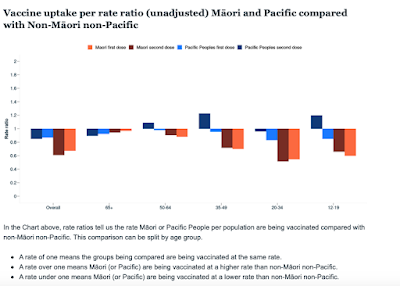 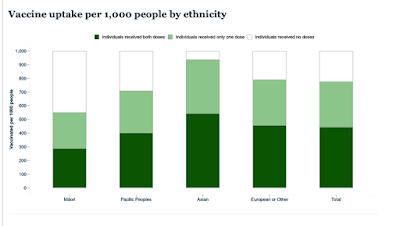 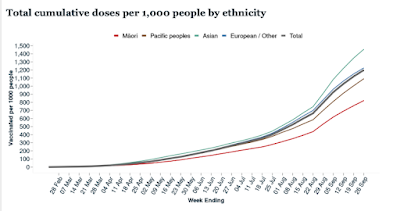 Jacinda Ardern is the teacher of the kindy class who is keeping the whole class behind because of some ridiculous standard of her own based on what is now just making things up as we go along.

All the good kids are not allowed to bully the bad kids into complying.  The good kids all have to sit there like muppets waiting for the bad kids to adhere to standards that no other class in the school needs to follow.

Doesn't work in a kindergarten.

Eventually all the good kids get together and vent their fury at the teacher first then if she doesn't change the rules, they go after the bad kids.

As I have predicted before right now is the time New Zealanders lose patience with Ardern.  We all knew Maori would despite massive resources thrown at all them especially for this roll out, be hopelessly slow to comply. Herd immunity as explained to us by the “experts” meant everyone else could do the heavy lifting.

Ardern needs to act very quickly before we all see on 11 October the glorious freedoms that Sydneysiders will be enjoying and New Zealanders simply turn on each other.