The Cost Of Covid Brownmail Today Doled Out By Ardern - $120m

We learned a few more things today from the non-announcement of the traffic lights.

1. The fools have NO vaccination passport ready.  They need November to actually do that, which is why there are no traffic lights yet for the South Island.  They cannot currently run a system to exclude the very few people who are not vaccinated.

2. The cost of the Maori caucus agreeing to this was $120 million to their mates. Brownmail.  As predicted in my post in response to Sir Ian Taylor being gamed.

I have heard whinging that Maori have not been given resources to "reach their people".  We can debunk this false news very quickly.

Exhibit A  A process began in April 2021 with expected contract start dates of 1 July 2021 to do the very thing that Maori have whinged about. 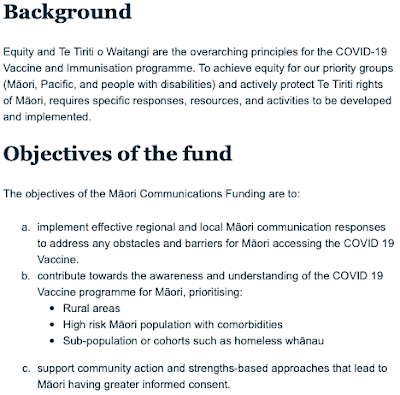 Where has the money gone?

Who got this money?

What did they actually do from 1 July running this campaign? 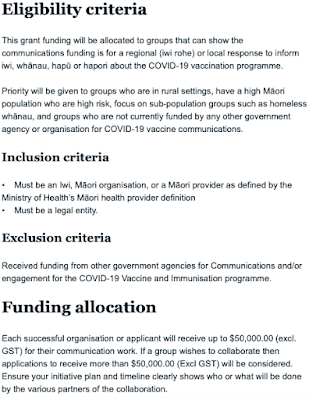 Where the hell has that gone?
TPK seem to only have updated their website with any action at all from September 2021.  What have they been doing before this time?
Leading into today Exhibit C - $120 MILLION!!

This is ridiculous.
What is there left to spend $120 million on?  In one month they have not been able to do the job with $38 million.  Is this in addition to that funding and of course the Comms strategy that Maori could apply for way back in April 2021?
The country should be open within a month.  One month to burn yet another $120 million on the plastic!!!
The Maori roll-out needs its own Commission of Inquiry.  Forget NSW, New Zealand needs its own Independent Commission Against Corruption to analyse the expenditure and conflicts in doling the cash out of these three Exhibits A to C.
Older Maori have got vaccinated.  The problem in Auckland is the younger lot.
There is no difficulty physically to reach them, they're all in lock down.  They are not rural, unreachable and are mobile enough to go get vaccinated because they're mobile enough to go do other things.  They are just choosing not to probably out of sheer bloody mindedness or laziness.
As I wrote this week:

I would actually like as a next step a "Maori Monday" to back up the Super Saturday.
On Monday and every Monday I would like every New Zealander who has been vaccinated, has a business awaiting to be opened on their last borrowed cash, kids at home who need to be homeschooled, who cannot see their elderly relatives, who cannot cross a border, who has to limit numbers at a wedding or a funeral, who has to sit in 14 days MIQ, who cannot go out for dinner, meet in groups ..... everyone.
To loudly remind Maori leaders that they ARE now the reason we cannot do these things.
And demand better.
Because that is how you negotiate with a terrorist regime.   You hit them where it hurts.
You do not pander to them - you gather your troops and turn on them.

Look no further.  Just like Chinese people are not the problem the CCP is, Maori people are not necessarily the issue, their leaders running this extortion and brownmail racket are.
In some jobs for the common peasants now it is no jab no job.
How about until all restrictions are lifted on vaccinated persons, Ardern run a strict no jab no income support payments?
Record vaccinations within a week.