Luxon As Leader? No Choice Is Always The Best Possible Choice

The National Party caucus have no other option but to pick Chris Luxon as leader.  Along with it Nicola Willis as the Deputy should she put her name forward for the job.  She is definitely a future contender for leader at some point. 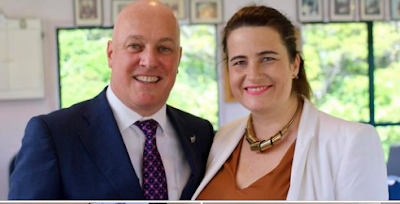 This is precisely the best possible position Luxon could find himself in.  Simon Bridges and Judith Collins effectively blew themselves up last week.  As spectacular as it was, it was the worst Christmas news outside Jacinda Ardern announcing her resignation to "spend more time with her family and have another child", that Labour could have had.  Hold the phone on that.

Many political commentators, all whom have never succeeded at politics, let alone anything much else in life, are saying Luxon's experience as a business leader does not translate into success politically.  They even go to the whispering classes put out by the left that Luxon was not much good at his job leading the government department that was Air NZ.

While of course this is correct for many examples where business does not equal politics, they miss the point.

They have no fucking idea how Chris Luxon will be as leader either.  Just like everything else they have a guess at.  Luxon is not Todd Muller.  He has run a company outside of eating for the company in the marketing and political lobbying division.  In doing so he faced a wee bit more KPI pressure than Muller has ever in his life.

He is religious. Well who cares? If he was a devout muslim there would be zero chances of the sort of commentary out of the commentariat. As someone who views all religion as stark raving mad and officially bothering to tag yourself in atheism equally so, I ignore that and keep going.

Successive generations are collectively failing at being parents, the job most people claim to be their most amazing achievement. As a collective over time we are giving birth to children who in greater numbers than ever before wish to actually kill themselves.  Tell me parenting as a practise is getting better?

Failure at one area in life does not guarantee failure or success at another either. Most fail at political commentary in their predictions but bully and scream the loudest to get on radio or in print.

Currently we have a Prime Minister who previously had a CV so dreadfully weak that she had to bring up her fine work at a Fish and Chip shop in Morrinsville.

Politics however is ALL about timing.

Covid arrived in February 2020. When Air New Zealand had a gold plated CEO take over.  Not even he could stop the company tanking.

Tell me Chris Luxon does not have the lady luck of timing on his side?  He dodged the largest bullet in corporate history being in charge of an airline during Covid.

The National caucus have no other option but to pick Luxon and FIFO - fit in or fuck off.

If I was Chris Luxon I would be demanding many MP's announce their "retirements" the second he was chosen.  Rebuilding the party starts with candidate selections and 2022 needs to be focused on getting the right personnel for the future.

The first one I would be demanding as any corporate leader would in that ruthless fashion, is Simon Bridges.  Rinse him publicly.  You could guess the second, third, fourth and even fifth.  And that is before you demanded Peter Goodfellow to walk the plank as well.